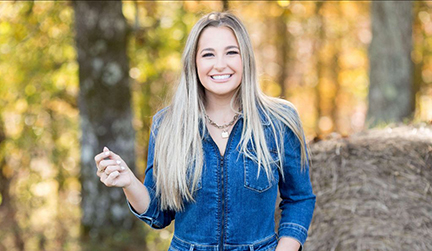 Up and coming singer/songwriter and RECORDS Nashville artist Erin Kinsey just debuted her official music video for viral hit, “Just Drive,” on November 18. Written by Kinsey, along with Michael August, and Josh Ronan and produced by Ronan, the song continues to connect online with over 27 million streams/views to date and counting. The “Just Drive” music video, directed by Dustin Haney and filmed just outside of Nashville, checks off a bucket list moment for Kinsey. Watch above.

“It’s truly an honor to be able to experience something that I have been dreaming of my entire life,” says Kinsey. “I had so much fun and will always remember my very first major music video! I’m just so grateful for every person who has helped get me to this point. It was an amazing day!”

Texas native Erin Kinsey may be a country music newcomer, but she’s been hard at work since she was 11 years old. Now 21, she is the epitome of a 10-year overnight success who has established herself as a Nashville singer-songwriter with a bright future ahead of her. Having moved from Texas to Tennessee the morning after her high school graduation, Kinsey quickly immersed herself in country music, and in return she was embraced by music insiders who’ve helped her reach her larger-than-life goals. And so far, so good. She consistently receives close to ten million views when she posts an original song on TikTok, and her “Just Drive” single has been featured on SiriusXM The Highway “On The Horizon.” Kinsey is signed to RECORDS Nashville, a joint venture with Sony Music. Where she goes from here is just about everywhere.

Music editor for Nashville.com. Jerry Holthouse is a content writer, songwriter and a graphic designer. He owns and runs Holthouse Creative, a full service creative agency. He is an avid outdoorsman and a lover of everything music. You can contact him at JerryHolthouse@Nashville.com
Previous Bonnaroo Announces 2022 Dates
Next Dean Dillon, Marty Stuart & Hank Williams Formally Inducted To CMHF