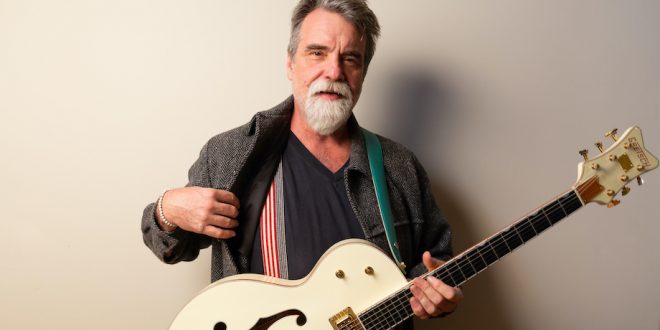 Darrell Scott To Release Live Version Of ‘A Satisfied Mind’

When he was a member of Robert Plant’s revamped Band of Joy, beloved, award-winning Nashville, TN songwriter and instrumentalist Darrell Scott was asked by Plant to take the mic and sing a song during the band’s 2010 tour. Instead of one of his own compositions, Scott chose to sing Red Hayes and Jack Rhodes “A Satisfied Mind.” 10 years later, Scott is releasing a version of the song, recorded during the Band of Joy tour, and featuring Plant, Patty Griffin and Buddy Miller.

“I first heard ‘A Satisfied Mind’ from a Glen Campbell recording in the mid 1960s – my brother used to sing it as he was a Glen fanatic,” says Scott. “Fly forward decades later when I performed the song in a trio I was in when I first got to Nashville in the mid-90’s. Then in 2010 while I was on tour with Robert Plant and the Band of Joy that included Buddy Miller and Patty Griffin, Robert wanted me to lead a song for the show…I considered the many songs I had written and decided to offer a song I did not write: ‘A Satisfied Mind’ (written by Red Hayes & Jack Rhodes) because it highlighted this great band and these great singers on THIS great song from the late 1940’s (first recorded by Porter Wagoner). Once it was in the show it was welded in place as it was the right song for the slot. I sang it every show for the next 18 months. Fly forward another 10 years and I had called a session with Buddy and Patty in Nashville to simply record it with the 3 of us, and the day before we were to go in studio (and from the archives of our front of house sound man, the late great Roy Williams, via Buddy) I was sent this live recording – and there was no need to have a studio version – as we had this: this performance, on some night, somewhere in the world, with these friends: Robert, Buddy and Patty. So, where does the time go, Uncle John?”

Over the course of his career, Scott has worked with Steve Earle, Emmylou Harris, Sam Bush, Guy Clark and many others. A four-time GRAMMY nominee, his songs have been covered by The Chicks (formerly the Dixie Chicks), Brad Paisley, Faith Hill, Keb’ Mo’ and his “Long Time Gone” was even sampled in Beyoncé’s remix of “Daddy Lessons.” Named a “Songwriter of the Year” by both ASCAP and NSAI, in 2007 Scott won “Song of the Year” at the Americana Music Awards for “Hank William’s Ghost,” and his latest album Darrell Scott Sings the Blues of Hank Williams (released in April 2020), was his tribute to the legendary artist that dug deep into Williams’ catalog and focused on more obscure and bluesier tunes.

Music editor for Nashville.com. Jerry Holthouse is a content writer, songwriter and a graphic designer. He owns and runs Holthouse Creative, a full service creative agency. He is an avid outdoorsman and a lover of everything music. You can contact him at JerryHolthouse@Nashville.com
Previous Tyler Childers Debuting New Spotify Singles Session Today
Next Laura Rabell Exclusively Premieres “The Highway” On Nashville.com