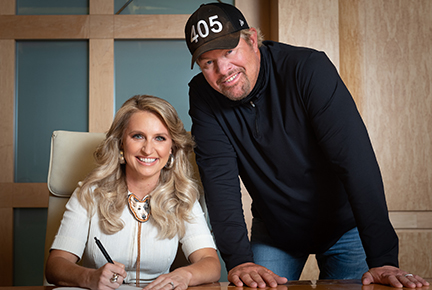 “She sings country music with emotion and range,” says Show Dog’s Toby Keith. “I am big on songwriters and her talent impressed me. She’s a songwriter that has something to say.” A 2015 inductee into the Songwriter’s Hall of Fame, Keith knows of which he speaks.

Kelly has released a crowd-funded EP and two independent albums, and her signing with Show Dog follows years of honing her craft on stages from Gilley’s to Gruene Hall while making periodic trips and an eventual move to Nashville. Kelly has been writing, performing, and toured as a backup singer for her sister, singer/songwriter Kristen Kelly. Kelly has written with esteemed writers and performers including Lori McKenna, Terry McBride, Erin Enderlin and Steve Wariner. Other notable and influential collaborators and cheerleaders for Kelly include Radney Foster and the late legend Billy Joe Shaver. Kelly currently hosts the “Play Something Country” radio show on Gimme Country Radio .

“I’m thrilled to have a nod from Toby and the Show Dog team, and for the opportunity to make more music! Toby has done things his way, and I feel like I’ve tried my best to do the same,” Kelly said. “I’m looking forward to having this great team behind me. I’m grateful David Macias [Thirty Tigers] came across my last ep, and believed in it and me enough to introduce me to Toby and the label.”

Show Dog Nashville was founded in 2005 by Toby Keith and, in its current iteration, will market Kelly’s music in partnership with Thirty Tigers. The label’s most recent signing, Clay Walker, is enjoying a creative resurgence with the poignant single “Need A Bar Sometimes” as he works on his comeback album coming this year. Meanwhile, the company’s executive ranks and promotion prowess have been bolstered by the recent promotion of Senior VP Rick Moxley, addition of VP Teddi Bonadies and promotion of Director/Promotion & Streaming Blake Nixon.

Music editor for Nashville.com. Jerry Holthouse is a content writer, songwriter and a graphic designer. He owns and runs Holthouse Creative, a full service creative agency. He is an avid outdoorsman and a lover of everything music. You can contact him at JerryHolthouse@Nashville.com
Previous Dan + Shay Getting Back On The Road
Next Moon Taxi Announces “Silver Dream” Tour