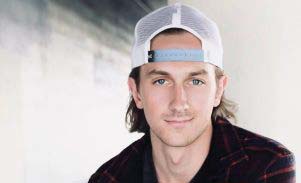 Country singer Cooper Alan will be making his Grand Ole Opry debut on September 21. Joining the lineup that includes Opry members The Isaacs and the Del McCoury Band along with Priscilla Block, Steven Curtis Chapman and more. Alan’s debut will be a big step in his budding career.

“Making my Opry debut is something I’ve dreamed of my entire life. My heroes have all sung on that stage and I’m incredibly honored, humbled, and grateful that it is my turn to step into that circle. A huge thank you to the Opry staff for believing in me and my amazing team for working so hard to help me get here!” says Alan.

The news was broken to Cooper by Grand Ole Opry Director of Artist Relations & Programming Strategy Jordan Pettit in a video posted on TikTok.

“We have lots of respect for artists who go from playing bars to headlining their own tours, all while growing such an engaged & dedicated fan base. Because of that, we’re thrilled to welcome Cooper onto the Grand Ole Opry stage to make his debut,” said Pettit.

With over 100 million streams on his music and 10 million followers across social platforms, Cooper has built a loyal fanbase through years of writing, releasing music and playing shows across the country.

Music editor for Nashville.com. Jerry Holthouse is a content writer, songwriter and a graphic designer. He owns and runs Holthouse Creative, a full service creative agency. He is an avid outdoorsman and a lover of everything music. You can contact him at JerryHolthouse@Nashville.com
Previous LISTEN: Miranda Lambert Covers “I’m Just An Old Chunk Of Coal”
Next Stephanie Urbina Jones To Perform At Nashville Soccer Club