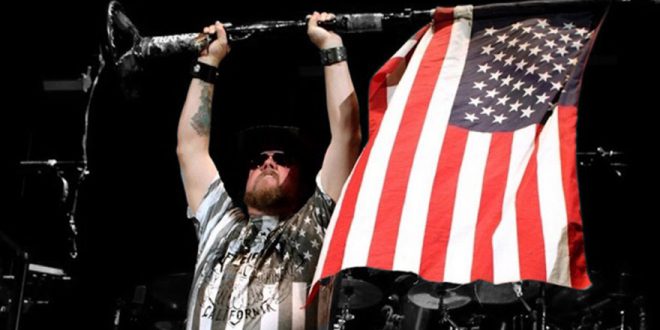 “Young Americans,” featuring Lady Antebellum’s Charles Kelley and brother, Josh, is the newest song from Colt Ford which shipped to radio via Play MPE and All Access July 24. “Young Americans” appears on Ford’s new album, “Love Hope Faith,” released in May.  Listen to the recent premiere of “Young Americans” on Rolling Stone Country here.
Singing of adolescent dreams of trying to “live big in a small town,” Taste of Country calls “Young Americans” a “universal blast of nostalgia.” Talented songwriters Jared Sciullo, John Purdue, Renee Myers and Austin Webb co-wrote this wistful song.
Commenting on the collaboration with the Kelleys, Ford recently told Billboard Magazine, “I’ve known those boys forever. They are Georgia guys. We’ve been good friends for a long time, and they are two of my favorite singers. Charles and I talked about doing something together for a long time. We just had to find the right song. When I heard it, I thought it had the right groove, and I thought about getting Josh in on it too.”
Ford continues his “Love Hope Faith” summer tour criss-crossing the country entertaining fans. On a recent tour stop, one of Ford’s biggest fans was hoisted onstage in his wheelchair where he joined Ford for a duet of “Dirt Road Anthem” and subsequently stole the mic and the show. Check out the viral video here.
In addition, Pandora has just announced Ford is amongst the top three artists (amongst all genres) that has been instrumental in helping their new artist marketing platform (AMP) hit 1 billion audio message impressions (as measured by consumption) since it launched just two years ago. The service has enabled Ford to talk directly to his fans on Pandora via artist audio messages about his new single, “Young Americans,” his new album Love Hope Faith and his nationwide tour dates.
About Colt Ford:
In 2012, Colt co-wrote two #1 hits; Jason Aldean’s “Dirt Road Anthem,” and Brantley Gilbert’s, “Country Must Be Country Wide.” His album, “Declaration of Independence,” topped the Billboard Top Country Albums chart at #1, and was followed by, “Thanks For Listening,” in July 2014. “Thanks For Listening” charted at #1 on Billboard’s Independent Albums, #1 on Billboard’s Rap Albums chart, #2 on Billboard’s Top Country Albums Chart and #10 on The Billboard 200 Albums chart. Colt and his band are featured in “Joe Dirt 2: Beautiful Loser,” starring David Spade, which was released in July 2015 on Crackle TV.
To date, Colt has sold over 1 million albums, millions more song downloads, has 1.6 million Facebook Likes and over 100 million YouTube views.  In addition to being a gifted songwriter and artist, Colt is also a former professional golfer, and resides with his family in Athens, GA. Follow Colt at www.ColtFord.com and on Twitter, Facebook, and Instagram. To catch Colt in concert, visit www.AverageJoesOnTour.com.

Previous Catching up with Tennessee Homegrown Band, Judah & the Lion, the Band you Should be Following
Next Blake Shelton And The Oak Ridge Boys Get ‘Animated’