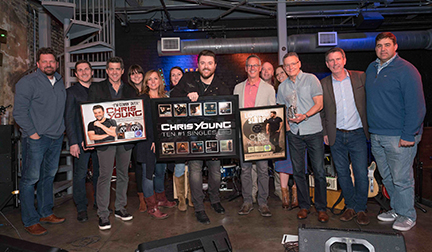 “We have no idea if we ever get to stand with a microphone in front of people at a No. 1 party ever again.  I didn’t think I’d get to do my first one,” says Young.  “It really is one of those things where I went from playing at El Chico on Murfreesboro Road, and with everybody’s support…my family’s support…and a lot of luck, right now I’m standing up here talking about my tenth No. 1 and Randy Travis is sitting over there.”

Chris Young No. 1 Singles
“Getting’ You Home (The Black Dress Song)”*
“The Man I Want To Be”
“Voices”*
“Tomorrow”*
“You”*
“Who I Am With You”
“I’m Comin’ Over”*
“Think Of You” with Cassadee Pope*
“Sober Saturday Night” featuring Vince Gill*
“Losing Sleep”*
*co-written by Chris Young
Earlier in the evening, Young made an after-hours visit to the Country Music Hall of Fame and Museum where he previewed the new exhibition American Currents: The Music of 2017, including memorabilia from Chris’s noteworthy year. Later this week he headlines the Houston Rodeo before resuming his sold-out “Chris Young Losing Sleep 2018 World Tour,” with more than 40 arena and amphitheater dates on the books including his first hometown headlining show at Nashville’s Bridgestone Arena. For a full list of tour dates and more information, visit chrisyoungcountry.com.

Music editor for Nashville.com. Jerry Holthouse is a content writer, songwriter and a graphic designer. He owns and runs Holthouse Creative, a full service creative agency. He is an avid outdoorsman and a lover of everything music. You can contact him at JerryHolthouse@Nashville.com
Previous 10 Questions with Wade Bowen
Next Brett Young Goes Triple Platinum With “In Case You Didn’t Know”