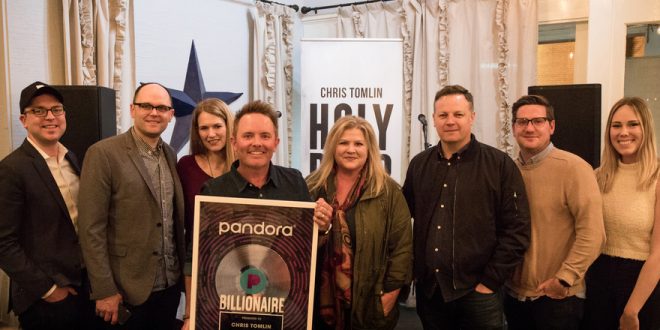 During an exclusive album preview event in Nashville this week for loyal Pandora listeners, Chris Tomlin was recognized as the first Christian artist to reach the Billion streams threshold on PANDORA and was presented with their BILLIONAIRE award. Chris is one of only a handful of artists in any genre to reach this benchmark. To date, Chris has 1.8 Billion lifetime spins and averages 4.5 million streams per week. Chris spoke with the Associated Press about the recognition, view it HERE

“I’m so honored to represent this amazing genre of music that features so many incredible artists,” said Chris. “What this ‘billion’ honor reminds me of is that every week there are billions of people who gather together in worship. Anywhere there is dirt on this earth people are worshipping God. I’m so thankful to be a part of that.”

“The level of Chris Tomlin’s performance on Pandora is extremely rare and exceptional in the Christian/Gospel genre, with 1.8 BILLION lifetime streams, 2.6M unique listeners and 20M+ streams each month ,” says Melissa Chalos, Programming Curator, Christian/Gospel Music | Pandora. “Fifteen of the Top 100 worship songs sung in churches around the globe have his name on them, and 8 of his 11 album releases have reached No. 1. We are excited to welcome worship artist Chris Tomlin to the Pandora Billionaire’s Club and to acknowledge the millions of fans engaging with his music here on Pandora. It’s our loyal Pandora listeners who determine which artists become Billionaires, and we honor them and their pick in Chris.”

With 11 albums, 16 #1 radio singles, a Grammy award, 21 Dove Awards, and two platinum and five gold albums to his credit, Chris is among the most recognized and influential artists in any genre of music known around the world. It is estimated each week 20-30 million people sing one of his songs in worship. Last fall, in another career milestone Chris became one of only four artists ever to receive the Sound Exchange Digital Radio Award for over 1 billion digital radio streams, others include Justin Timberlake, Pitbull and Garth Brooks.

This Friday, Chris will release his new album Holy Roar with a companion book Holy Roar: 7 Words That Will Change the Way You Worship available now. On November 30, he will launch Chris Tomlin Christmas: Christmas Songs of Worship Tour scheduled to run through December 16, 2018 wrapping at the Beacon Theater in New York City. And recently announced, Chris will launch the Holy Roar Tour in March 2019 with guests Tauren Wells, Pat Barrett, Nicole Serrano and Chris’ Pastor Darren Whitehead. Tickets for both tours will be available at www.christomlin.com .

Music editor for Nashville.com. Jerry Holthouse is a content writer, songwriter and a graphic designer. He owns and runs Holthouse Creative, a full service creative agency. He is an avid outdoorsman and a lover of everything music. You can contact him at JerryHolthouse@Nashville.com
Previous Dailey & Vincent First-Ever Christmas Record Now Available
Next Tony Joe White Dead At 75