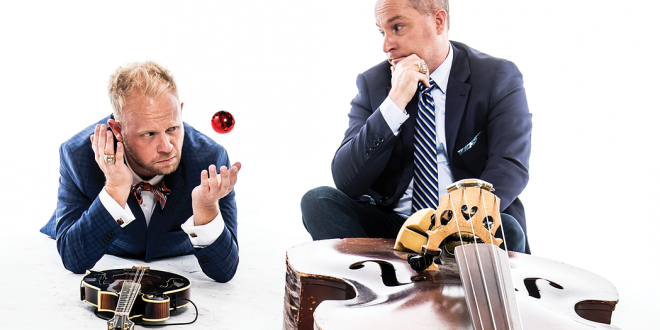 The bluegrass veterans were also joined by 2018 Country Music Hall of Fame and Bluegrass Music Hall of Famer, Ricky Skaggs, on a cut of Alabama’s “Tonight It’s Christmas,” which is one of two bonus tracks available exclusively when fans purchase the Christmas record at Cracker Barrel Old Country Store locations and online at CrackerBarrel.com.

“I’ve wanted to record a Christmas record my whole life, so to say I’m unhinged with excitement over the release of The Sounds of Christmas is an understatement!” expressed Jamie Dailey.

“It’s been a dream of ours the past 10 years. Timing is everything, and we’re very happy we waited. The song selection on this album takes you through a journey from childhood to adulthood, laughs, memories and the true meaning of Christmas,” added Darrin Vincent.

The Sounds of Christmas experience is more than just an album release as momentum continues throughout the holiday season with a nationally broadcast television Christmas concert special, four all-new Christmas episodes of “The Dailey & Vincent Show” on RFD-TV and a 15-city Christmas tour.

Throughout “Dailey & Vincent’s A Springer Mountain Farms Chicken Christmas Tour,” fans will enjoy songs from the new record as well as other Dailey & Vincent staples live. The tour kicks off in Virginia on Nov. 24.

Music editor for Nashville.com. Jerry Holthouse is a content writer, songwriter and a graphic designer. He owns and runs Holthouse Creative, a full service creative agency. He is an avid outdoorsman and a lover of everything music. You can contact him at JerryHolthouse@Nashville.com
Previous New Stars Added to CMA Awards Performer Lineup
Next Chris Tomlin First Christian Artist to Reach One Billion Pandora Streams