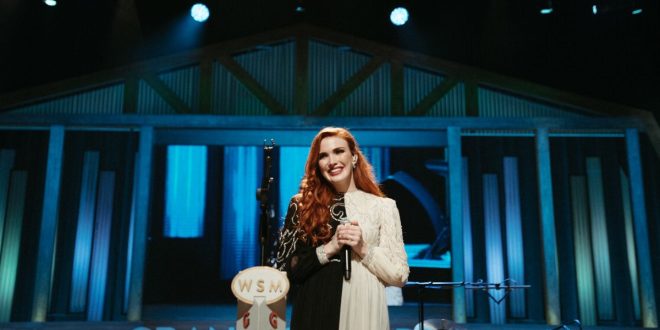 Capitol Records Nashville’s Caylee Hammack made her Grand Ole Opry debut on Friday (8/23). The singer stepped onto the famed stage with an entrancing version of Patsy Cline’s “Crazy,” a song she sang in Nashville for the first time when she was 13 at Ernest Tubb Record Shop. Hammack then performed “Family Tree,” with dozens of her family members front and center for the debut, who serve as inspiration for the breakout single.

“When I was 13 growing up in South Georgia, I begged my parents to drive me 6 hours to Nashville,” shared Hammack. “One of our first stops was to the Ernest Tubb Record Shop and a little bar beside it, now long gone, where I sang ‘Crazy’ for my parents and maybe a handful of other people off of a lyric sheet. And 12 years later, I knew exactly what I wanted to sing once I stepped in the circle for my Grand Ole Opry debut. That was as close to Patsy as I’ll ever get. It meant the world to have all of my family in the audience right there with me.”

Earlier in the week, Hammack paid tribute to another country powerhouse at the annual ACM Honors event at the Ryman Auditorium to help present the Cliffie Stone Icon Award to Martina McBride with her bluesy rendition of “A Broken Wing” that elicited a standing ovation.

Hammack’s next stop is the Seven Peaks Music Festival this weekend, from there she will join opening slots for Dierks Bentley and Miranda Lambert. Her debut single “Family Tree,” co-written and produced by Hammack was the most-added single at Country radio by a female artist in over three years.

Music editor for Nashville.com. Jerry Holthouse is a content writer, songwriter and a graphic designer. He owns and runs Holthouse Creative, a full service creative agency. He is an avid outdoorsman and a lover of everything music. You can contact him at JerryHolthouse@Nashville.com
Previous Americanafest Announces 18th Annual Honors & Awards Show Performers
Next Watch: Gwen Sebastian Releases “Rock Stars”