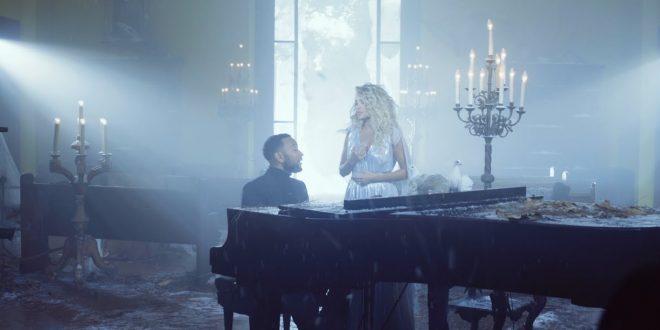 My Gift reclaimed the #1 spot on the Billboard Country chart last week for the third non-consecutive week, and has consistently stayed in the Top 5 on the Billboard Holiday Album Chart since its release. The album currently sits at #5 on the all-genre Billboard Top 200. Underwood currently has four songs on the Holiday Top 200 Streaming Chart (“Favorite Time of Year,” “Silent Night,” “Hallelujah,” and “Little Drummer Boy”) as well as four songs in the Top 30 on the Mediabase Holiday Music Chart (“Hallelujah,” “Have Yourself A Merry Little Christmas,” “Little Drummer Boy,” and “Mary, Did You Know?”)

The album features a combination of beloved traditional favorites celebrating the spiritual nature of the holiday, as well as several new originals, two of which are written by Underwood, frequent collaborator Brett James (“Jesus, Take the Wheel,” “Something In The Water”), and her Cry Pretty co-producer, David Garcia. GRAMMY® Award-winning producer, mixer, songwriter and multi-instrumentalist, Greg Wells produced and arranged the album.

The original song was written by Legend and Toby Gad. The video was directed by acclaimed director and photographer, Randee St. Nicholas, who has shot multiple videos with Underwood throughout her career, including “Cry Pretty,” “Drinking Alone,” “Blown Away” and “Smoke Break,” all of which have been honored as CMT’s Video of the Year. Legend also appears as a special guest on Underwood’s new music special “My Gift: A Christmas Special From Carrie Underwood.”

Music editor for Nashville.com. Jerry Holthouse is a content writer, songwriter and a graphic designer. He owns and runs Holthouse Creative, a full service creative agency. He is an avid outdoorsman and a lover of everything music. You can contact him at JerryHolthouse@Nashville.com
Previous Jason Isbell And Nathaniel Rateliff Top Americana’s Year-End Top 100 Radio Airplay Charts Of 2020
Next LISTEN: Eric Church Expresses Gratitude In “Doing Life With Me”