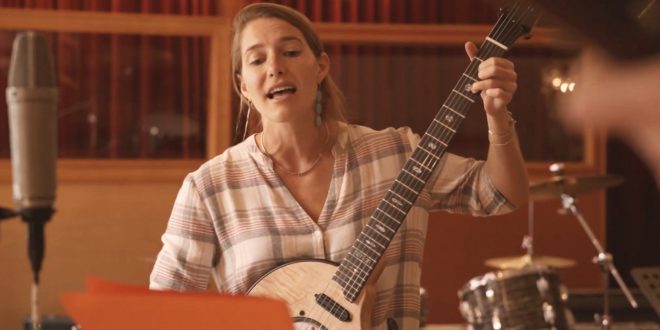 Rising star, country singer/songwriter Caroline Jones has been busy in New Zealand for the past few weeks and ended up teaming up with a local Bluegrass band to put a fresh upbeat twist on two traditional Christmas songs – “Silver Bells” and “Winter Wonderland.” The collection is out today, Nov. 20th. “The Trenwiths and I recorded these two songs, stomping down-home bluegrass style, at Neil Finn’s famous Roundhead Studios in Auckland. I have adored working with them, and hopefully we will also record a few traditional folk songs down the road,” Jones said. “It’s hard to put into words how truly down-to-earth, genuine and funny this family band is, but hopefully folks will feel it in the music we have made thus far. They are an absolute blast! And I’m so happy I get to spread that joy with ‘Silver Bells,’ as a holiday gift to my fans.” Download “Silver Bells” here.

The Trenwiths are two brothers, and their father. They play a mix of modern songs, folk songs and old-time bluegrass music. “Caroline’s a delight to play music with – she was immediately open to trying a different approach to these Christmas classics, and with her incredible vocal and instrumental skills, really made them come alive,” Paul Trenwith said. “With both the Hamilton County Bluegrass Band and The Trenwiths, we’ve had a ‘tradition’ of putting a bluegrass beat to songs that weren’t necessarily intended to be played that way. I, along with my sons Sam and Tim, and our great friend Keith, are so happy that Caroline and her team wanted to be part of that process. We might have created some ‘new’ Christmas standards!”

So far in 2020, Caroline has toured with country stars Sara Evans and Lee Brice, made her return to the legendary Grand Ole Opry stage, and appeared in a moving virtual concert as part of Global Citizen and the World Health Organization’s “Together At Home” Series. Caroline is also the host of Sirius XM’s Art & Soul where she sits down with musicians from around the world for intimate acoustic performances and conversations about their craft and creating the perfect song.

Music editor for Nashville.com. Jerry Holthouse is a content writer, songwriter and a graphic designer. He owns and runs Holthouse Creative, a full service creative agency. He is an avid outdoorsman and a lover of everything music. You can contact him at JerryHolthouse@Nashville.com
Previous PREMIERE: Stuffy Shmitt’s “Sweet Krazy”
Next The Swon Brothers Drop Self-Produced Album NASHLAHOMA Today