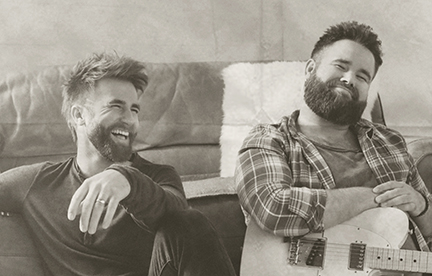 The Swon Brothers release their self-produced full-length album, NASHLAHOMA, today. It is the duo’s first album in six years. The record went into the #8 position on the Country iTunes sales chart in less than 12 hours. Listen to “Best of the Best” above.

The new music is a labor of love for the brothers who started the bulk of the recording just a couple of weeks before the pandemic hit.

“We just got in there and let our hearts take the reins and our country roots showed on this record,” The Swon Brothers comment.

The 11 song album (and a reprise) was written by and co-written with an impressive array of some of Nashville’s best, including Florida Georgia Line’s Tyler Hubbard and Brian Kelley, Little Big Town’s Jimi Westbrook and Philip Sweet, and Lady A’s Charles Kelley as welll as Nashville Hitmakers Corey Crowder, Jordan Schmidt, Rodney Clawson, Jason Massey, Matt Rogers and the list goes on. Zach and Colton also took the production helm for the new record, producing the entire project with the exception of two songs co-produced with Evan Hutchings.
A bucket list moment for the brothers was having country music legend Vince Gill appear on “Travelin’ On.” The fellow “Okie” lent his pristine velvet vocals and signature guitar licks to the track. New artist Lewis Brice co-wrote “Southern Draw” with The Swon Brothers and is also featured on the recording.

Music editor for Nashville.com. Jerry Holthouse is a content writer, songwriter and a graphic designer. He owns and runs Holthouse Creative, a full service creative agency. He is an avid outdoorsman and a lover of everything music. You can contact him at JerryHolthouse@Nashville.com
Previous Caroline Jones Goes Bluegrass For Christmas
Next WATCH: Home Free Cashes In For Christmas