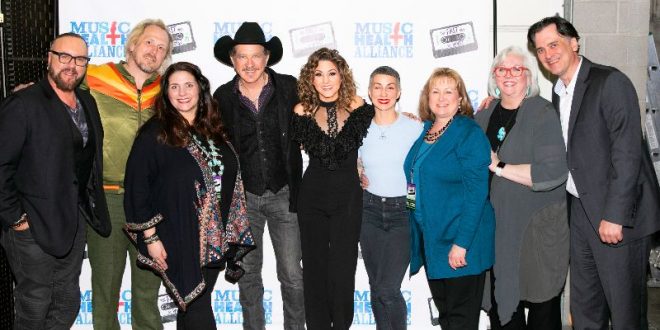 The fifth annual “The First And The Worst” played to a packed house last night at Nashville’s City Winery for an unforgettable evening of music. The one-of-a-kind event brought together Country Music Hall of Fame inductee and radio personality Kix Brooks, Grammy-winning and Emmy-nominated songwriter Desmond Child, edgy storytelling hitmaker LUKE DICK, The Last Songwriter and Real Country featured artist JAMIE FLOYD and four-week #1 smash “Speechless” co-writer Laura Veltz to perform the very first and worst songs they’ve ever written as they divulged the stories and the songs that led to their biggest hits, all to benefit MUSIC HEALTH ALLIANCE.

Monies raised during “The First And The Worst” event and silent auction total more than $500,000 over five years and allow Music Health Alliance to continue to provide free healthcare support and advocacy to songwriters, artists, musicians and music industry professionals at every stage of their career. Thanks to the direct efforts of MHA, members of the music community across the country have gained access to lifesaving transplants, medicine, mental health resources, end of life care and many other medically necessary services. In addition to the priceless advocacy work undertaken by the 8-person team, individual and corporate donations allow MHA to underwrite services including dental care and mammograms for uninsured clients and grants for mental health care via The Jack Pot, named for Cowboy Jack Clement. In addition, the Ben Eyestone Fund, founded in partnership with the late drummer’s family and St. Thomas Health, has saved 18 lives in 2018 by providing access to diagnostic testing and follow-up treatment. Another 13 clients with non-life-threatening medical needs have received exams, diagnoses and treatment, all covered by the Ben Eyestone Fund resulting in zero medical debt.

Songwriter SANDY KNOX (“Does He Love You?,” “Why Haven’t I Heard From You?”) was the first to take the stage, sharing the inspiration behind “The First And The Worst” before humbly performing her not-so-memorable song “Mr. Phone.” Highlights from the evening of first and worst songs from Nashville’s most esteemed talents included Dick’s slang song “TTYL,” Floyd’s “I Have No Neck,” Brooks’s “Deny, Deny, Deny,” and Child’s “Rock Hard” originally written with Paul Stanley and Diane Warren. The Crappy-award winning song of the night went to Veltz for her audience favorite, “Little Dipper.” And the night wouldn’t be complete without performances of the writers’ biggest hit songs – including “Kill A Word” (Dick), “The Blade” (Floyd), “Red Dirt Road” (Brooks), “Speechless” (Veltz) and “Livin’ On A Prayer” (Child).

“In 5 years we’ve seen the best songwriters in the world compete for the title of the worst song ever written and in the process we’ve raised over a half-a-million dollars to enable access to healthcare to keep the music playing for all genres of music across the nation,” said Music Health Alliance Founder and CEO, TATUM ALLSEP. “It was a spectacular night to say the least and we are grateful.”

“The First And The Worst” – an evening of really bad songs by really good writers – showcased songwriters Brooks, Child, Dick, Floyd and Veltz in their finest form. Hosted by music historian and musician Peter Cooper, this unique event allowed the audience to peek inside the brilliant minds of hit songwriters long before they had ever written a chart-topper or had songs recorded by superstar artists, all for a worthy cause. Since 2013, Music Health Alliance has saved over $40 Million dollars in lifesaving healthcare and insurance premiums and served over 9,700 people in the music community. Learn more at musichealthalliance.com.

Music editor for Nashville.com. Jerry Holthouse is a content writer, songwriter and a graphic designer. He owns and runs Holthouse Creative, a full service creative agency. He is an avid outdoorsman and a lover of everything music. You can contact him at JerryHolthouse@Nashville.com
Previous Buddy & Julie Miller To Release First Album In A Decade
Next Born To Uke Coming To Nashville to Distribute Free Ukueleles