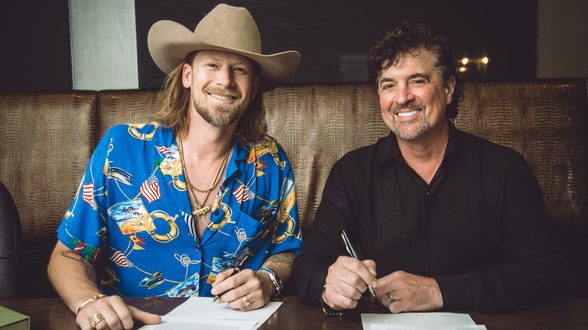 Big Machine Label Group President, CEO, and Founder Scott Borchetta announces today (6/15) that DIAMOND-selling superstar Brian Kelley is returning to BMLG for the release of his future solo projects. Signed to the Big Machine Records imprint – also home to Tim McGraw, Carly Pearce, and Midland – Kelley will debut “American Spirit” on July 1. The anthem offers a tribute to one of the nation’s sacred symbols and brave defenders who honor it with their service.

“Everyone at Big Machine gives a giant and warm welcome-back to Brian Kelley,” shares Borchetta. “Our results together are historic, and we look forward to building on this incredible foundation as BK enters an extremely creative season with us.”

“It feels good to be home at Big Machine with Scott Borchetta and the team! Their work ethic, heart, creativity, and commitment to winning is what led me back,” adds Kelley. “We’ve worked so well together on many successful projects in the past, and I couldn’t be more excited about this next chapter. I’m grateful for this opportunity and honored to collaborate with Scott again! Off to the races!”

Oh, in every big city in all the small towns
Hats come off when the flags come out
Every mom-and-pop shop is flyin’ ‘em proud
Because you can’t take down

American spirit, that red, white and blue
It’s flyin’ for freedom for me and for you
It’s what I believe in, this country I love
That American spirit runs in our blood

The cover art was hand-painted by PENLEY (aka Steve Penley) who is one of America’s most celebrated artists with works exhibited worldwide. This powerful painting resonated with Kelley whose “Poppy” – John Edward Kelley – served in the U.S. Army during WWII and was a prisoner of war, earning two Purple Hearts. The Atlanta-based painter is also a fan of Kelley’s music creating a natural collaboration for this visual of “American Spirit.”

This marks new music for the history-making artist-songwriter, who released solo effort SUNSHINE STATE OF MIND in 2021 and made a splash with sold-out audiences on his MADE BY THE WATER TOUR, after an unparalleled decade-plus as one half of GRAMMY-nominated duo Florida Georgia Line. Under BMLG, the global superstars became the first and only Country act to achieve two RIAA DIAMOND-certified singles with 11X PLATINUM, No. 1 breakout “Cruise” (the best-selling digital Country single of all time – SoundScan) and 11X PLATINUM, No. 1 “Meant to Be” with Bebe Rexha (holding the longest reign on the Billboard Hot Country Songs chart at 50 straight weeks). They tallied 19 career No. 1 singles, 16.1+ billion global streams, sold more than 32.9 million tracks and 4.7 million albums worldwide, logged 1.9 billion video views, and played to over 4 million fans spanning massive headline tours. FGL also earned multiple CMA, ACM, and Billboard Music Awards while expanding their creative empire with thriving business initiatives like FGL House. Diversifying his enterprise, Kelley is also hands-on with projects like cult-favorite brand Tribe Kelley with wife Brittney and a partnership with Oyster City Brewing Company.

Tonight, Kelley will take the stage during opening night of the buzzed-about MAY WE ALL: A NEW COUNTRY MUSICAL, stepping into the rotating role of “Bailey Stone” at Tennessee Performing Arts Center in Nashville, TN. Also serving as a producer under his production company CuzBro Productions, the world premiere engagement runs now through July 17.

Music editor for Nashville.com. Jerry Holthouse is a content writer, songwriter and a graphic designer. He owns and runs Holthouse Creative, a full service creative agency. He is an avid outdoorsman and a lover of everything music. You can contact him at JerryHolthouse@Nashville.com
Previous Opry To Celebrate Barbara Mandrell’s 50th Anniversary
Next Bonnaroo Is Back!!!!!