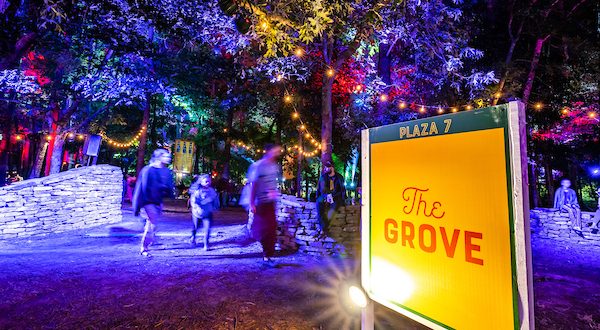 The Bonnaroo Music and Arts Festival has announced the lineup for its famed Campgrounds and Plazas. The 20th-anniversary edition of Bonnaroo takes place September 2–5, 2021 on the Bonnaroo Farm, located just 60 miles southeast of Nashville in Manchester, TN.

CENTEROO
For the first time ever, Bonnaroovians can say “ I roo ” at the House of MatROOmony. Produced by iamsound, Bonnaroo’s new House of Love will host romantic activities like Lovesick Karaoke Happy Hour, interactive photo booth installations, and daily wedding ceremonies where attendees can get hitched by very special guests. Registration is available now HERE .

PLAZAS & CAMPGROUNDS
“Sanctuary Of Self Love,” curated by Hayley Williams in collaboration with iamsound and Conscious City Guide, will be back and better than ever. Bonnaroovians can relax and rejuvenate themselves through the weekend with mindful movement practices (including a newly expanded meditation forest, tea ceremony gazebo, and yoga space), hairstyling by the new Good Dye Young on-site Hair Salon, deep sound bath rituals, talks, and panel sessions offering powerful tools for mental clarity and personal transformation, and, for the first time ever, a healers village offering pre-booked one-on-one sessions spanning massage to aura photography and reiki.

Presented by BACARDÍ, the totally re-imagined and re-oriented “Where In The Woods ” stage will feature DJs and surprise headliners in a new magical treehouse environment where Bonnaroovians can chill during the day and party all night on a spectacular dance floor that comes to life after dark with kaleidoscopic lights and sounds. New additions also include immersive cabanas and a massive conga line hosted by NPI and Puzzle.

Plaza 7: The Grove is a fantastical wooded oasis, filled with mythical creatures by Brett Douglas Hunter and live harp performances by Yomí That Harpist.

Music editor for Nashville.com. Jerry Holthouse is a content writer, songwriter and a graphic designer. He owns and runs Holthouse Creative, a full service creative agency. He is an avid outdoorsman and a lover of everything music. You can contact him at JerryHolthouse@Nashville.com
Previous “The Charlie Daniels Podcast” Launches August 6th
Next Celebrate Restored Centennial Park With Dan + Shay