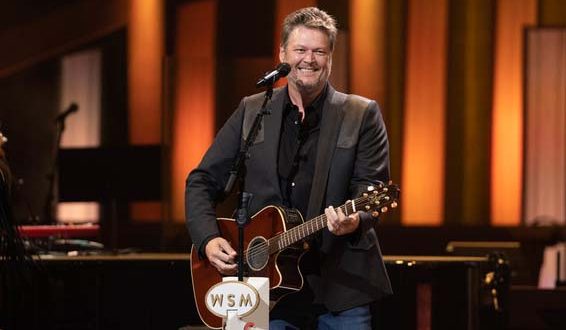 Blake Shelton returned to the Grand Ole Opry House this past Saturday performing two back-to-back shows. The Opry member sang his hits “Boys ‘Round Here” and “God’s Country” as well as his latest single “No Body.” It was a memorable night for the Opry crowd when Shelton brought out a special guest, Grammy-winning multi-platinum recording artist, Gwen Stefani. Stefani officially made her Grand Ole Opry debut in May 2020 virtually from Oklahoma, but she returned in person Saturday night to perform “Nobody But You” and “Happy Anywhere” with Shelton.

On stage, Shelton remarked the night as being, “One of the most incredible nights of my career.”

The evening was packed with performances from multiple NBC’s “The Voice” alumni including season 21 runner up, Wendy Moten, and season 17 winner, Jake Hoot. The most significant performance was from Todd Tilghman, season 18 winner, as this marked his Grand Ole Opry debut. The “Team Blake” alum has been a regular musical guest at Shelton’s Ole Red venues and recently performed at Ole Red Gatlinburg in celebration of his Opry debut.

Of his experience on working with Blake and what playing at Ole Red and now the Grand Ole Opry has meant to him, Tilghman says, “Anytime I get to work with Blake is amazing. And anytime I play Ole Red there is always a stellar crowd. The opportunity to play there isn’t just super fun, but it feels a bit like family. I would love to describe my Opry debut experience, but there just are no words. It was literally insane. It felt like stepping into music history and becoming a tiny part of it. Thanks, Blake, for the invite. And for believing in me since the Blind Audition!”

Ole Red, which marks its five-year anniversary this month, has quickly become home for up-and-coming artists. Just last week, Shelton made a red phone call in to Ole Red Nashville for “Team Blake” alum, Dalton Dover during his recent “Ole Red-sidency,” inviting him to make his Grand Ole Opry debut.

Music editor for Nashville.com. Jerry Holthouse is a content writer, songwriter and a graphic designer. He owns and runs Holthouse Creative, a full service creative agency. He is an avid outdoorsman and a lover of everything music. You can contact him at JerryHolthouse@Nashville.com
Previous LISTEN: Dustin Lynch’s “Wood On The Fire”
Next Mitchell Tenpenny Makes History With Latest #1