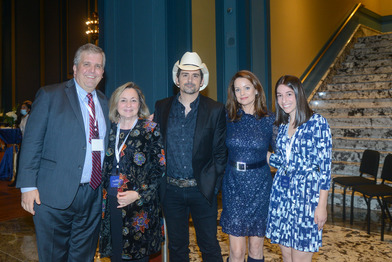 As part of the Inauguration Celebration for new Belmont University President Dr. Greg Jones, alumnus Brad Paisley was honored at a reception that occurred before “A Night of Stories and Songs,” an evening that tied into the inaugural theme to “Let Hope Abound.” Prior to the concert, Jones revealed that a ballroom in the campus’ new Fisher Center for the Performing Arts would be named to recognize Paisley and Kimberly Williams-Paisley for the good work they are doing with The Store, a nonprofit they founded two years ago, as well as to express Belmont’s gratitude for the endowed scholarship fund the couple created and the strong example Brad sets for students following in his footsteps.
In unveiling the ballroom name, Belmont President Dr. Greg Jones said, “Brad and Kim together represent so much of what is wonderful about Belmont. To paraphrase a song that Brad has sung, ‘When we all get where we are going’ we’ll all be grateful and for the better because we’ve been associated with Kimberly Williams-Paisley and with Brad Paisley. This remarkable facility will long be associated with the legacy of both of their contributions to Belmont.”
Brad Paisley said, “I look around now at what Belmont is doing, and it’s incredible. When I was going here, I just wanted to find my place in the Nashville music business, but now you can almost do anything you want in the world once you get a degree here. That impacts our charity in a way we never envisioned when we first pitched this idea—It can be so much more than a grocery store. I just want to use us as a school and as a charity to do good things in the world.”
The Brad Paisley and Kimberly Williams-Paisley Ballroom can be utilized for acoustic and amplified performances, as well as a rehearsal space for performances on the main stage of the Fisher Center for the Performing Arts, a stunning new Nashville venue which was officially dedicated in September.
Through the course of the Nov. 4 private concert event and discussion with retired broadcasting legend and former Belmont Director of Special Projects and Major Gifts, Harry Chapman, Paisley shared an update on The Store, a referral-based store that seeks to empower low income families in the area with access to free, nutritional groceries. The Store is located on Belmont’s campus and offers free wraparound services staffed by University faculty and students to aid families with financial, legal and healthcare-related needs. Since opening at the beginning of the pandemic in Spring 2020, The Store has served more than 1.5 million meals.
The Brad Paisley Endowed Scholarship, established in 2012, provides financial assistance for a deserving student with demonstrated need who is studying in the Curb College of Entertainment and Music Business. In 2003, Paisley received the Distinguished Alumni Award from Belmont. A 1995 graduate with a Bachelor of Business Administration degree, Paisley majored in music business at what was then the Mike Curb School of Music Business. During his Belmont career, Paisley himself benefitted from a scholarship supported by Vince Gill and has long been committed to “paying it forward” to another deserving student.
Jeanette Porcello, a Belmont alumna and current A&R Manager at Atlantic Records, was a Brad Paisley Scholarship recipient during her senior year on campus, one of 70 students the Paisley Scholarship Endowment has supported since it was established in 2012. Porcello noted, “In Brad’s book he wrote, ‘you could say the music is my life but a better way to put it is to say that music has given me life.’… Music has truly given me life as well. Thank you Brad for investing in students like me and helping them reach their full potential.”

Music editor for Nashville.com. Jerry Holthouse is a content writer, songwriter and a graphic designer. He owns and runs Holthouse Creative, a full service creative agency. He is an avid outdoorsman and a lover of everything music. You can contact him at JerryHolthouse@Nashville.com
Previous Nashville.com’s Favorite New Christmas Albums
Next 3rd Annual Charlie Daniels Patriot Awards Dinner Raises $250,000+