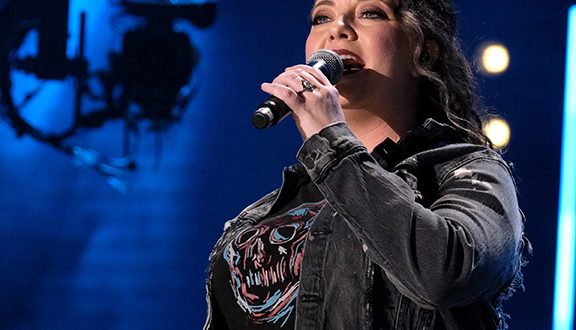 With touring still on hold, Ashley McBryde gives fans a taste of what her GRAMMY-nominated album sounds like live with her upcoming six-song EP Never Will: Live From A Distance.

“We released Never Will on April 3 last year, so we went straight from rehearsals for a tour to not seeing each other in person for months,” reflects McBryde. “Getting together to rehearse and record these live versions safely was our way of giving the fans a taste of what they would have seen had the world not changed so much. Man did it feel good to strap on the guitar and see my guys and just play, but we cannot wait to do it again with our incredible fans in person soon.”

The four-time GRAMMY nominee continues to garner critical acclaim for Never Will, earning the title of Best Album from January’s Nashville Scene’s 21st Annual Country Music Critics’ Poll, voted by a consortium of leading national music critics, along with achievements in four additional categories: Best Single for “One Night Standards” at No. 3 and “Martha Divine” at No. 26; Best Female Vocalist at No. 2; Best Songwriter at No. 6; and Artist of the Year at No. 4.

“In an election year that misread the flyover, where people are both lonely and broke, it’s a gift to have someone who writes so well about money and desire as well as Ashley McBryde does,” Steacy Easton shared with Nashville Scene, while Jim Macnie remarks, “From throwing Grandma’s ashes off the roof to responding to treachery with a murderous glee, McBryde has upped her artistic confidence, and the music soars in kind.”

Music editor for Nashville.com. Jerry Holthouse is a content writer, songwriter and a graphic designer. He owns and runs Holthouse Creative, a full service creative agency. He is an avid outdoorsman and a lover of everything music. You can contact him at JerryHolthouse@Nashville.com
Previous Richard Bennett Releases Powerful Tribute To Steve Gulley & Tony Rice
Next WATCH: Flatland Revival’s “Bible Belt Kid”