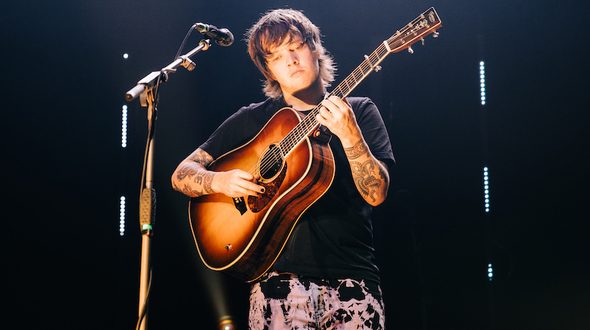 The Americana Music Association revealed the winners of the 21st Annual Americana Honors & Awards at the Ryman Auditorium last night. An eclectic group of musical innovators garnered coveted awards, including Billy Strings (Artist of the Year), Allison Russell (Album of the Year), Brandi Carlile (Song of the Year), The War and Treaty (Duo/Group of the Year), Sierra Ferrell (Emerging Act of the Year) and Larissa Maestro (Instrumentalist of the Year).

Guitar picking phenom Billy Strings, who released Renewal (his third album) last year, was crowned Americana’s Artist of the Year. Dobro and steel guitar virtuoso Jerry Douglas presented and accepted the award on behalf of Strings, who is performing on tour this week in New England.

Triple nominee Allison Russell earned the Album of the Year Award for her critically acclaimed record Outside Child, produced by Dan Knobler. She accepted the award from respected music critic and NPR writer Ann Powers.

Allison Moorer and Hayes Carll awarded two-time Artist of the Year Brandi Carlile for the Song of the Year with “Right On Time,” written by Carlile, Dave Cobb, Phil Hanseroth and Tim Hanseroth.

The War and Treaty (Michael and Tanya Trotter) won Duo/Group of the Year after winning Americana Emerging Act of the Year in 2019. The celebrated duo accepted their trophy from the Brooklyn band Lucius and further cemented their rising career trajectory.

On the heels of her critically acclaimed new album Long Time Coming, Sierra Ferrell was also honored by the Americana music community and received this year’s Emerging Act of the Year Award.

Highlights from the evening include Brandi Carlile and Allison Russell delivering a soul-stirring rendition of “You’re Not Alone,” as well as the iconic McCrary Sisters honoring their late sister Deborah (who passed away in June) with a chills-inducing performance of “Amazing Grace.”

Americana stalwart and reigning All-Star Band musical director Buddy Miller was surprised by Robert Plant, who presented Miller with The Lifetime Achievement Award, which was previously unannounced. Miller graced the audience with his classic “Wide River To Cross.”

Praised by Emmylou Harris as “the shining star of Nashville and music everywhere,” the show came to a memorable close with a sing-along of “I’ll Take You There” (written by Lifetime Achievement Honoree Al Bell and made famous by The Staple Singers).

“Every year, the musicians from this community come together to create this wonderful show. I say it time and again, ‘I don’t know how we’re going to top this,’ yet these artists find a way,” said Jed Hilly, Executive Director of the Americana Music Association. “It was an emotional show where love and loss were buoyed by friendship and community. It is humbling to have a small part in it.”

Album of the Year: Outside Child, Allison Russell; Produced by Dan Knobler

Artist of the Year: Billy Strings

Duo/Group of the Year: The War and Treaty

Instrumentalist of the Year: Larissa Maestro

Music editor for Nashville.com. Jerry Holthouse is a content writer, songwriter and a graphic designer. He owns and runs Holthouse Creative, a full service creative agency. He is an avid outdoorsman and a lover of everything music. You can contact him at JerryHolthouse@Nashville.com
Previous Tootsie’s Will Celebrate 62nd Birthday With Free Concert
Next LeAnn Rimes Releases Her 19th Album, God’s Work