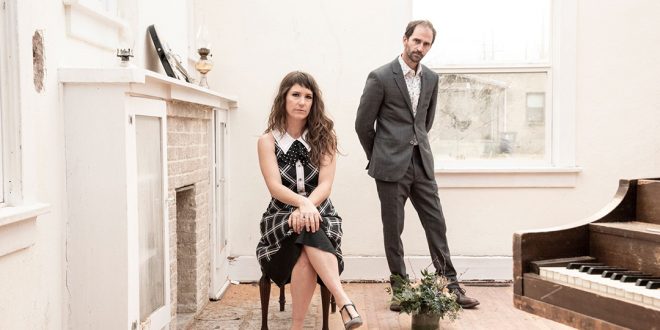 Alright Alright’s new album, Nearby, is out tomorrow. The Denver-based alt-folk collective, driven by the powerhouse husband-and-wife songwriting team of Seth and China Kent – is set to release its debut full-length album, Nearby, on October 5, 2018 via Hooves and Sugar Record Co.  The seductively atmospheric record was produced by the duo with Eric Dawson Tate and Ben Wysocki, mixed by Eric Dawson Tate, and mastered by Alan Douches of West West Side Music.

From the strings-and-choir-driven wishing-well aspirations of “Be Kind” to the slow-building smoky-twangy revelations of “By the Bed” to the zeitgeist temperature-taking of “Luckiest Girl in America” to the harmonic bent-truth yearnings of “The Liar,” Nearby deftly carries the listener through each successive chapter of the ever-growing, ever-evolving Alright Alright saga.

“Every song on Nearby is a combination of who produced it and who recorded it,” observes China, who gifts the music they make with vocals, piano, keyboards, and string arrangements. “And the challenge,” adds her partner Seth, who performs vocals and acoustic and electric guitar, “was in making it all into something cohesive.” Nearby also serves as a companion piece to Alright Alright’s 2016 Faraway EP, the titles of which China gleaned after reading Rebecca Solnit’s insightful 2013 essay collection, The Faraway Nearby. Points out Seth, “Our songwriting has become more and more personal. Each song on Nearby was more directly, yet sometimes obtusely, about us. The writing mode we’re now in fuses material about place with material about the personal.”

Each Kent channels an impressive C.V. into Alright Alright’s musical DNA. China attended Vanderbilt University and is a classically trained pianist, while Seth has spent time on record and on tour as a guitar tech with the super-successful Denver-bred alt-rockers The Fray (“Over My Head (Cable Car),” “How to Save a Life”). Together, the Kents have also helped compose the scores for a number of fine independent films including Brick, Blue State, The Brothers Bloom, and Jam. The sonic scope of these scores, well, underscore just how adept the married duo are when it comes to bringing such cinematic sensibilities into their own work.

Both China and Seth grew up in self-described “musically conservative” households before eventually finding common ground in their mutual love of U2’s 1991 game-changing and genre-challenging Achtung Baby. “Hearing that album on endless repeat opened up the idea that you could make a simple song say something really powerful,” Seth reports. Concurs China, “It was a total shift, especially for someone classically trained like me. I forced myself to listen to Achtung Baby over and over again because it sounded so dissonant to me, but I had to make my ears comply with what I was hearing.”

There was a brief period of time the Kents contemplated throwing in the towel altogether as they raised their kids, but something inside just wouldn’t give. “The creative pull was ultimately too strong,” admits China. “It was an epiphany to realize this was what I have to bring to the world.” Seth had his own creative epiphany following the end of a different outside gig. “Why go through the pain and agony of reinventing myself when I could do music with someone who I like?” he muses. “Musically speaking, we come from very different backgrounds, but we make it work.”

The twosome plans to support the album with a tour but no Nashville dates announced as of yet. Already they’ve enjoyed touring opportunities this year as varied as the Nowhere Else Festival over Memorial Day weekend, and in July, Seth, China, and their kids paddled the Colorado River for several days with the acclaimed Centennial Canoe Outfitters; each evening, the duo performed a combination of original songs, campfire songs, and beloved covers for the other river travelers.

Music editor for Nashville.com. Jerry Holthouse is a content writer, songwriter and a graphic designer. He owns and runs Holthouse Creative, a full service creative agency. He is an avid outdoorsman and a lover of everything music. You can contact him at JerryHolthouse@Nashville.com
Previous Stephanie Urbina Jones Makes Her Grand Ole Opry Debut
Next Carrie Underwood Goes Worldwide with “Cry Pretty”