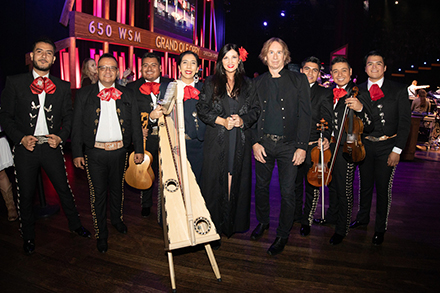 Stephanie Urbina Jones made her Grand Ole Opry debut on Tuesday, October 2 to a standing ovation. For Jones, performing on the Opry stage alongside mariachis has been a life-long dream, and if the audience reaction is any indication, Jones made their dreams come true as well. In a moving introduction, WSM’s Eddie Stubbs spoke to Jones’ “lifelong love affair” with country music. “It’s in her heart, in her soul, it’s deep in her very being. Also very deep in her being are her Hispanic roots,” Stubbs said, “She has done something very unique with music — marrying her God-given talents of loving and singing country music with her Hispanic roots.” It was truly a groundbreaking moment, when finally, Stubbs announced, “As best as we can determine, nothing like this has ever happened before in the 93-year history of the Grand Ole Opry.”

Jones opened her performance with a rousing rendition of Charley Pride’s number-1 hit “Is Anybody Goin’ to San Antone” and closed with Lynn Anderson’s 1970 iconic song “Rose Garden.” Jones also performed what she calls a “telenovela” version of the classic Dolly Parton hit, “Jolene.” All three songs are featured on her upcoming honky tonk classic country mariachi album, Tularosa.  Jones was joined on stage by her producer Patterson Barrett and seven-piece band, Mariachi Internacional Nueva Galicia. Jones’ appearance marks the first time in the Opry’s 93-year history that a woman performed on the iconic stage with mariachis — a designation fitting for Hispanic Heritage Month (Sept. 15-Oct. 15), which the Opry marked by hosting this performance.

Jones’ next stop will be a performance at the Country Music Hall of Fame on Oct. 28 where she will take the stage with mariachis for their Musician’s Spotlight at the Ford Theatre.

On September 28, Urbina Jones released her latest studio album, Tularosa, an inspired marriage of country classics and mariachi rhythms named for the place where it was recorded. Tularosa honors Urbina Jones’ musical icons — a string of legends from Dolly, Patsy, Willie, and Merle to Johnny and June — and the Mexican heritage that feeds her sound and soul. Urbina Jones, a San Antonio native, is well-known for celebrating her Hispanic heritage through her music, which can be described as Latin-rooted Americana, or “Texicana country folk-rock.”

Music editor for Nashville.com. Jerry Holthouse is a content writer, songwriter and a graphic designer. He owns and runs Holthouse Creative, a full service creative agency. He is an avid outdoorsman and a lover of everything music. You can contact him at JerryHolthouse@Nashville.com
Previous John Scott Sherrill Takes Up Residence At Famous Music Row Bar
Next Alt Folk Duo, Alright Alright, Set To Release Debut Album