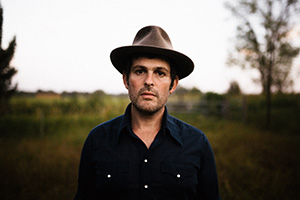 Alan Isakov Coming To The Ryman For 2 Shows

Singer, songwriter Alan Isakov will kick off his spring headline tour next month with two nights (3/29-3/30) at Nashville’s historic Ryman Auditorium. Tickets for the tour, which will feature special guests Joe Purdy and Aoife O’Donovan, are on-sale now. $1 from each ticket sold will support Real Farmer Care, whose mission is to support farmers’ self-care needs. GET TICKETS HERE.

The forthcoming performances follow Isakov’s album, Evening Machines, which was nominated for Best Folk Album at the 62nd GRAMMY Awards and debuted at #1 on Billboard’s Americana/Folk Albums chart. Out now via Isakov’s own label Suitcase Town Music in partnership with Dualtone Records (stream/purchase here), Evening Machines was recorded at a converted barn studio located on Isakov’s three-acre farm in Boulder County, CO.
Isakov has released four full-length albums as well as a special a collaborative record—2016’s Gregory Alan Isakov with the Colorado Symphony, which featured orchestral versions of some of Isakov’s most beloved songs. Ahead of the symphonic album, Isakov released 2013’s The Weatherman, which debuted at #1 on iTunes’ Singer/Songwriter chart.

Born in Johannesburg, South Africa, raised in Philadelphia, Isakov now calls Colorado home. When he isn’t on the road, he spends much of his time writing and recording songs in his barn studio, as well as running his farm in Boulder County, which provides produce to the farm’s CSA members, local restaurants, and Community Food Share (a Boulder County food bank).

Music editor for Nashville.com. Jerry Holthouse is a content writer, songwriter and a graphic designer. He owns and runs Holthouse Creative, a full service creative agency. He is an avid outdoorsman and a lover of everything music. You can contact him at JerryHolthouse@Nashville.com
Previous Morgan Wallen Grateful For 3 Sold Out Bridgestone Shows
Next Flat River Band Signs With Triple Crown Management