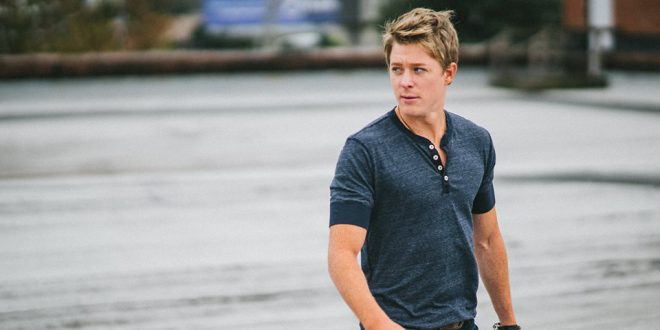 Independent singer/songwriter Adam Sanders has written songs for Luke Bryan, Dierks Bentley, Tyler Farr and many more including the signature No. 1 singles “Ain’t Worth The Whiskey” for Cole Swindell and “Hell of A Night” for Dustin Lynch.
Today Sanders released the second single, “Over Did It” from his upcoming self-titled EP. “I knew ‘Over Did It’ was special the minute we finished writing it,” said Sanders. “The title and sentiment of the song came from a real place, at a real time in my life when I was going through those particular feelings and emotions. I believe that this is the song that can take my career to a whole new level”

Sanders grew up in the north Florida town of Lake City, where he spent much of his youth with music; playing local fairs, talent shows and town festivals. While spending summers with his dad in Nashville, Adam found himself in and out of studios on Music Row with his uncle and professional musician, Scotty Sanders. It was then that Adam fell in love with the recording process, and the creative side of the music business. He knew this was where he was meant to be. With a plan of moving to Music City following high school graduation, Adam would spend as much time as possible, teaching himself to write songs about the things in life he knew about.

In 2009, Adam made the move to Nashville. While working construction on the side to pay the bills, Adam’s songwriting opened to co-writing, and building core relationships in the business. After just two years, Adam landed his first publishing deal with Big Yellow Dog Music and has had songs recorded by superstars such as Luke Bryan, whose album Crash My Party (featuring Sanders’ “Out Like That”) had the third highest debut of any record in 2013. Since then, more of Adam’s original songs have landed on projects by artists including (friend and fellow collaborator) Cole Swindell (“Ain’t Worth The Whiskey” & “Dozen Roses and A Six Pack”), Dierks Bentley (“Sounds of Summer”), Dustin Lynch (“Hell of a Night”) and Scotty McCreery. He scores his first #1 single as a songwriter in March 2015, when “Ain’t Worth The Whiskey” hit the top of the chart and had a second #1 with “Hell of a Night” in the summer of 2015.

Sanders has already independently sold over 70,000 singles and racked up over 36 million streams

To find out more about Adam Sanders go to his website http://adamsandersmusic.com.

Music editor for Nashville.com. Jerry Holthouse is a content writer, songwriter and a graphic designer. He owns and runs Holthouse Creative, a full service creative agency. He is an avid outdoorsman and a lover of everything music. You can contact him at JerryHolthouse@Nashville.com
Previous CMA Foundation Announces 2018 Music Teachers of Excellence
Next LoCash Premiers New Video “Don’t Get Better Than That”