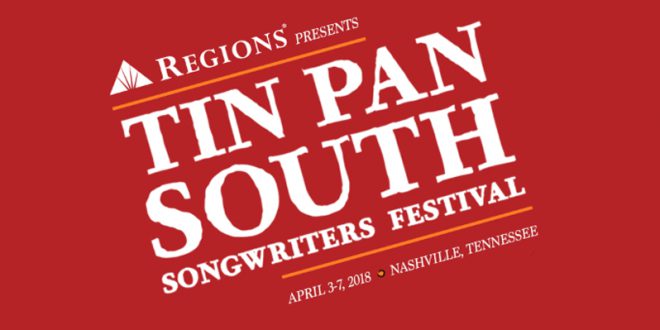 The Nashville Songwriters Association International (NSAI) has announced April 3-7, 2018 as the dates for the 26th Annual Tin Pan South Songwriters Festival. The popular event features hit songwriters from all genres of music performing at some of Nashville’s hottest music venues. Regions Bank returns for the 11th year as the presenting sponsor of the event.
Tin Pan South reigns as the world’s largest all-songwriter festival, and thousands of music fans attend the event annually to hear songwriters tell stories behind hit songs they have written and perform the songs as they were originally composed. The 2017 festival featured over 400 talented songwriters performing 100 shows during the five-day event.
For the 11th consecutive year, NSAI invited a select group of students at the Watkins College of Art, Design, and Film to present artwork concepts to be used on all marketing materials for the upcoming Tin Pan South Songwriters Festival. Students are given full creative license on how to best capture the sense of community, diversity and energy the festival embodies. Of the 13 participating students, the chosen design was created by María Sol Mancini. Currently an Illustration major at Watkins, Mancini was born in Buenos Aires, Argentina, raised in Sunrise, Florida and studied at the Dillard Center for the Arts.
“The idea behind the ‘Tin Pan’ piece was to create something fun and down to earth, so I went with a more hand-drawn style to reflect the heartfelt and creative part of original songwriting,” said Mancini. “I tried to capture the wildness and energy that comes while ‘cooking up’ song ideas and I wanted to showcase the festival ‘in-the-round’ experience.”
Stay tuned to tinpansouth.com in the coming months for information about venues, lineups, the popular Fast Access Passes and more.