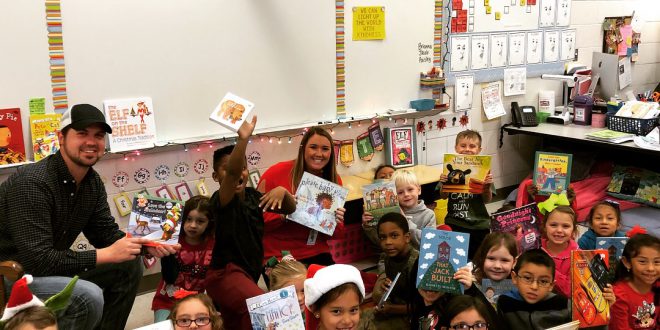 This holiday season Average Joe’s Entertainment artist, Devin Burris, gave the gift of literacy to Mrs. Flora’s first grade class at Crestview Elementary. Burris held a book drive with the help of Battered and Brewed, Nashville media, and social media influencers. After surprising the class with the new books, Burris read to them and answered questions.

Literacy is one of the most powerful indicators of a child’s future success. Unfortunately, too many children start school without the basic skills necessary to start to learn. Having direct access to books can help reverse these trends, developing confident readers prepared for success in school.

“Reading is the foundation of learning,” expressed Devin. “Children are like sponges and it’s important to provide material that expands their imagination. The further we push the next generation and the more we give them reason to imagine, the greater their potential. Our future world leaders and influences are currently children, so by all means, let’s set them up for success and pave the way to a brighter tomorrow.”

With a distinct voice well beyond his years, singer/songwriter Devin Burris cut his teeth on country music. His first love was Jazz and R & B, and you can hear those influences in his music. But after feeling “bland and empty, like something was missing” Burris switched gears and set his sights on a career in country.
Burris entered various talent contests and even performed for “America’s Got Talent” at the prestigious 3,000 seat Mahaffey Theatre in St. Petersburg, Florida. He continued honing his skills and chasing different genres, until participating in the 34th Country Showdown songwriting contest which “kick started something in these country bones.” Burris went on to represent the great state of Georgia in the talent search showcase.
“When the Smoke Clears,” was the song which propelled Burris to be chosen as Georgia’s most talented songwriters in the 2015 Country Showdown.  The song is featured on Burris’ five-song EP, along with the nostalgic “Settle Town.” Burris’ immense talent as a gifted songwriter, guitarist and singer is showcased on his debut project. With a traditional country voice as smooth as silk and reminiscent of many of country’s greatest singers, Burris cuts through the noise and delivers a fresh sound. Currently the Georgia-based singer/songwriter is working on his Average Joes Entertainment debut EP.
About Average Joes Entertainment:
Average Joes Entertainment launched in 2008 with flagship artist Colt Ford. Since its inception, the entertainment company has expanded to housing three labels, a management company, a publishing entity and a film and television production company, Hideout Pictures. Founded by CEO Shannon Houchins, the Nashville-based organization focuses on delivering a broad range of services to its artist roster, management clients and strategic partners including digital marketing, PR, tour marketing, creative and content creation, e-commerce, web development, list building and more.
Average Joes Entertainment is home to Colt Ford, Montgomery Gentry, Devin Burris, Cypress Spring, Charlie Farley, Sarah Ross, Moonshine Bandits, The LACS, Lenny Cooper, Bingx, Tommy Chayne and The Mud Digger Series. Subsidiary labels include AVJ Records and Backroad Records.