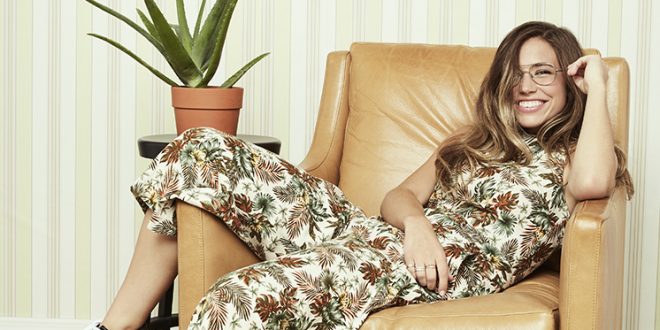 21-year-old pop singer Josie Dunne proves there’s a lot more than “Country” talent coming out of Nashville. The singer/songwriter recently released her debut single, “ Old School,” which hit the Top 15 on the US Viral Chart. She also released an accompanying, charming, fun video that stars her parents. Dunne’s new EP was co-written with Nathan Chapman and Amy Wadge.  For her first EP, Josie wanted to capture a Motown/pop sound and we can’t wait to hear more. But we won’t have to wait too long because she’ll be live at Exit/In this Friday, March 29th with Devin Dawson.

How was your transition/move to Nashville from Chicago?
My transition to Nashville from Chicago was really easy.  Nashville reminds me a lot of where I grew up actually.  The people are really nice here and I think they are the same way in Chicago. People hold the door and say hello on the street. In Chicago, I grew up in the suburbs, so Nashville being such a small town reminds me a lot of that.  In Nashville, you run into people you know at the grocery store or at coffee shops and I love that.  There’s a community here that is similar to the community I felt in the suburbs of Chicago.   The winters are much easier in Nashville, so I love it here.

You co-wrote the new album with Nathan Chapman and Amy Wadge. What was a typical writing session like with them?
I’ve been really lucky in getting to work with some of my favorite songwriters in the world.  It’s funny because no matter how big or successful the writer is, the process is almost always the same. I like to start with a beat or an instrumental riff and then sing melodies over that.  Then once we find the melodies we’re really excited about, we’ll attach lyrics to them.  Usually the lyrics take the longest.  In the past couple years, I’ve had an incredible experience learning how to write songs because I’ve had sessions with people like Nathan and Amy, so I’ve been learning from my heroes.

Can you tell us how your record deal came about?
My uncle, Jimmy, worked in the entertainment industry for a long time in LA and he was always really supportive of me.  So, when I was about 14, he and I made an EP of cover songs and we both sent it around to people we knew.  When I was 16, the people at Warner Nashville/Atlantic heard it and I had a couple meetings that went really well with them.  I think they saw something in me that I didn’t even see myself. So, I started traveling down to Nashville from Chicago for a week every month to write songs.  Once I’d graduated high school, I moved straight to Nashville and continued writing songs and developing as an artist.   I got really lucky that I kind of fell into an amazing label and such a supportive team.  They’ve been so wonderful to me.

The video for your first single “Old School,” stars your parents. Who came up with that idea and what was it like working with them on this project?
I knew right away that I wanted to tell my parent’s story in the music video.  They have such an incredible story- how could I not?! Plus, they’ve been the greatest examples of love in my life so any love song I write has been influenced by the love I’ve seen between them. It just made sense to have them be apart of the video.  I think it made the video that much more special to me to have my family in it.  Plus, my parents ate up the experience!  They loved getting to be a “diva” for the day, with a hair and make up person and a stylist.  It was a really cool way to get to do my first music video.

Who’s your favorite songwriter and why?
My favorite songwriter is Alanis Morissette. I’ve never met her, but I’m a massive fan of her’s.   Although her songs sound nothing like mine, there is so much emotion in every line.  And each lyric is important and seems authentic to the story and who she is as a person.  One of the biggest lessons my parents preached to my siblings and I growing up is that being true to yourself and genuine is the most important thing.  Alanis is the ultimate example of that, because it feels like no one can sing her songs like she can.  As a songwriter and artist, that’s the goal.

With whom would you sing your dream duet?
My dream duet would be with Stevie Wonder.  The first song I ever sang in front of anyone was “Sir Duke”.  Stevie is one of my favorites of all time. I would freak out if I ever met him, let alone heard both of our voices on the same song together.

What’s your favorite song that you didn’t write
A lot of cool, out-of-the-box pop music is being made right now and I’m a fan of it.  My favorite song changes by the hour, but right now, it’s probably “Don’t Kill My Vibe” by Sigrid.

What’s your favorite song that you wrote?
My favorite song off the EP is probably the second single, “Good Boys” which will be out really soon! It’s a fun one to play live because I think the groove of it is really fun.  It’s kind of funky.

Where’s your favorite place to eat in Nashville?
I think low-key Fido has one of the best burger in Nashville.  I always get crap from my friends for saying that, but they’re burger is so dang good. I also love Farm Burger. The #4 is a chicken burger that is to die for.  And their fries are great.

Music editor for Nashville.com. Jerry Holthouse is a content writer, songwriter and a graphic designer. He owns and runs Holthouse Creative, a full service creative agency. He is an avid outdoorsman and a lover of everything music. You can contact him at JerryHolthouse@Nashville.com
Previous Country Music Hall of Fame Announces 2018 Inductees
Next Luke Bryan Scores 20th Career Number One