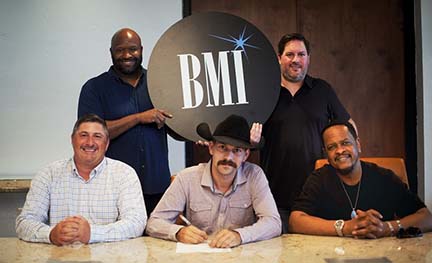 Porchlight Music announced the signing of singer/songwriter William Michael Morgan to their roster. The Mississippi native is the definition of an old soul and his love of country music runs deep. Morgan’s pure classic-southern sound and honest lyric crafted from raw emotion and real-life experiences represent a new generation of hit-makers reminiscent of iconic artists including Randy Travis, Alan Jackson, and George Strait.

Upon signing his first major-label deal at 19 years of age, Morgan found himself topping the country radio charts, and ultimately landing at No. 1 on Mediabase with the Gold-certified “I Met a Girl.” He followed that with his 2016 album debut, Vinyl, earning him a Billboard Top 5. He has also penned songs for other artist including the recent #1 “Tractor Town” for Texas country artist “Jake Bush.” Morgan has had the honor of performing on the stage of the world-famous Grand Ole Opry more than seventy times and was featured by the Country Music Hall of Fame and Museum as a highlighted artist in the 2017 American Currents exhibit.
Currently produced by Keith Stegall, Morgan is working on new music – five brand new songs that perfectly reflect the man and artist Morgan has become. His new music is the perfect blend of twang and tenderness while infused with a fresh new energy tapping into various musical genres including country, blues, and soul to create a bold and unique style of his very own.

Music editor for Nashville.com. Jerry Holthouse is a content writer, songwriter and a graphic designer. He owns and runs Holthouse Creative, a full service creative agency. He is an avid outdoorsman and a lover of everything music. You can contact him at JerryHolthouse@Nashville.com
Previous Stephanie Urbina Jones To Perform At Nashville Soccer Club
Next LISTEN: Dustin Lynch’s “Wood On The Fire”