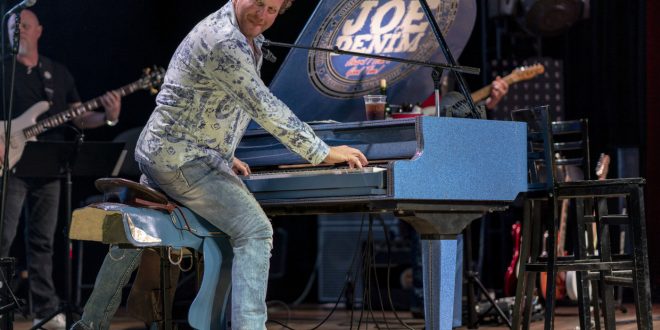 Twenty-five years after opening its doors, the World Famous Wildhorse Saloon continues to be one of Nashville’s favorite go-to venues for music and dining, and with the launch of a new monthly series called Blue Dizzy, venue goers can now experience an even more unique entertainment experience that is reminiscent of a late-night talk show meets live artist performances infused with sketch comedy segments.
“The Wildhorse is an iconic venue steeped in Nashville’s rich music history,” said Brian Schafer, general manager of Wildhorse Saloon. “As we celebrate our 25th anniversary, we are committed to invigorating our fan base with this fresh take on entertainment while cultivating and welcoming a new generation of fans.”
To commemorate the 25th anniversary, Wildhorse representatives traveled to Lynchburg, Tennessee to select an exclusive barrel of Jack Daniel’s Tennessee Whiskey. Only available in 2019, each menu creation has been thoughtfully and skillfully created to evoke the spirit of the Wildhorse and includes the exclusive barrel of Jack. Entrees infused with the exclusive barrel include some of chef’s great culinary delights like the Heritage Breed Tennessee Pork Chop, Shrimp & Grits, Bacon-Wrapped Filet, Hickory-Smoked Ribs and our Roasted Quarter Chicken; all available for order during Blue Dizzyevents.
Scheduled for once a month through November, each show features special guest appearances that include announced as well as sometimes unannounced performers, paired with comedy, story-telling, and line dancing.  Blue Dizzy shows are scheduled for May 23, June 27, July 25, Aug 15, Sept. 19, Oct. 10, and Nov. 14 and kick-off at 6:30 p.m.
The inaugural Blue Dizzy took place on March 19 and has since played host to artists such as American Young, Jerrod Niemann, William Michael Morgan, Ray Scott, Kaylie Shorr and more. Music and comedy are anchored by double-platinum selling songwriter/country artist Joe Denim and scheduled performers are backed by an all-star band made up of musicians whom have performed with Garth Brooks, Kenny Chesney, Toby Keith, and more.
“Blue Dizzy offers an ‘only in Nashville’ collaborative experience, fueled by music, people, and libations,” adds Joe Denim. “Fans will get to see the artists and performers in a different light than at a typical show, and that light shines from Blue Dizzy.”
Tickets are $28.00 for reserved table seating and $20.00 for General Admission. Attendees can take advantage of discounted ($15 flat rate) parking at the garage located at 210 Commerce St. or use code BLUEDIZZY for 10 percent off two Lyft trips (new Lyft users only).
A portion of the proceeds from each show will benefit the CMA Foundation.

Music editor for Nashville.com. Jerry Holthouse is a content writer, songwriter and a graphic designer. He owns and runs Holthouse Creative, a full service creative agency. He is an avid outdoorsman and a lover of everything music. You can contact him at JerryHolthouse@Nashville.com
Previous Eli Young Band Back At The Top Spot
Next Eric Church Will Make History Going Solo At Nissan Stadium