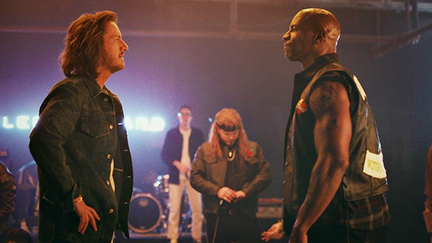 EMI Records Nashville recording artist Tyler Hubbard is gearing up for the January 27th release of his debut solo album, Tyler Hubbard, and today released an official video for his current single, “Dancin’ In The Country,” which is already in the Top 40 at radio and has over 35M global streams. The video stars Terry Crews (“America’s Got Talent,” “Brooklyn Nine-Nine”), was directed by Stephen Kinigopoulos and Alexa Stone and choreographed by Maya Taylor.

Set in a bar while Hubbard performs “Dancin’ In The Country,” Crews and his group of biker friends walk in and immediately the unexpected occurs on the dance floor in an extraordinary “bar fight.”
“This video is unlike any video that I’ve ever been a part of,” says Hubbard. “We had the ultimate heavy hitter with Terry Crews on set – he was made for a video like this. One minute, he looked like he was ready to punch a hole in the wall, and the next, he’s got the entire room laughing, just being himself. Terry is one of those guys that everyone wants to be around, and he was just perfect for this video.” Adds Hubbard, “Terry and the dancers brought the choreography to life and were able to tell the story through their amazing dancing.”

“I was so excited to be asked to do this video with Tyler and when I saw the concept, I thought there was no one else that could pull this off,” says Crews. “This video is like a three-minute touchdown celebration, and it was so great to be a part of. For Tyler to allow me to represent something he wrote from his heart means a lot and I can’t wait for everyone to see it.”

With 20 No.1 singles on country radio, Tyler Hubbard has already had a remarkable career as a songwriter and as one half of multi-platinum duo Florida Georgia Line. Now Hubbard is embarking on a solo career. Hubbard’s debut solo album, Tyler Hubbard, features his hit debut solo single “5 Foot 9,” which already hit No. 1 at radio, was certified Gold by the RIAA, and has over 282M global streams.

Music editor for Nashville.com. Jerry Holthouse is a content writer, songwriter and a graphic designer. He owns and runs Holthouse Creative, a full service creative agency. He is an avid outdoorsman and a lover of everything music. You can contact him at JerryHolthouse@Nashville.com
Previous Thomas Rhett Releases Favorite Song From New Album
Next Tim Raybon Band Drops New Single