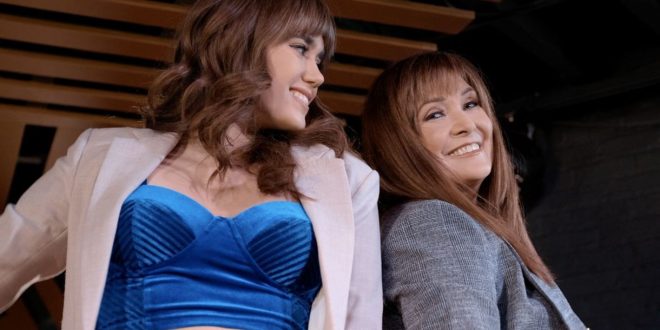 WATCH: The Belles, “My Mother’s Daughter”

Country mother-daughter duo The Belles have released their, heartfelt new music video for “My Mother’s Daughter” (watch above) following its premiere last week. The track is an ode to the special bond between a mother and daughter that Kelli wrote for her mother, Jaymie, last year as a Mother’s Day surprise. The video, directed by Simon Clark, showcases the striking resemblance in not only looks, but the ambition and passion for music Kelli and Jaymie share.

“This is a very special video for us and might be our favorite one we’ve ever made,” shares Kelli. “Our director Simon has this brilliant idea to recreate old photos of my mom and fade the image into me. I spent a week looking through family scrapbooks finding cute photos. On the shoot day, we spent hours lining up the camera and making sure I was in the exact same pose as my mom, recreating those images from her past. We added the storyline of a younger version of me to tie it all together. Jaida, the adorable little girl in the video, is one of our biggest fans, from Davenport Iowa. She was “The Belles” for Halloween and even had a Belles themed birthday party! She was so excited about shooting this video and gave such an awesome performance.”

The duo currently serves as the opening act of Nickelodeon’s JoJo Siwa D.R.E.A.M. The Tour – currently postponed due to the COVID-19 pandemic. They have previously opened on all 96 dates including the European and Australian legs of the tour. The D.R.E.A.M. Tour was named one of the top 5 highest grossing tours of 2019 according to Billboard alongside Elton John, Jason Aldean, Madonna and Carrie Underwood. It was also named one of StubHub’s Top U.S. Summer Tours alongside The Rolling Stones, Queen, Ariana Grande and more.

Music editor for Nashville.com. Jerry Holthouse is a content writer, songwriter and a graphic designer. He owns and runs Holthouse Creative, a full service creative agency. He is an avid outdoorsman and a lover of everything music. You can contact him at JerryHolthouse@Nashville.com
Previous “Nashville Hockey Song” Released For Tennessee Hockey Fans
Next Rising Star Clayton Anderson Releases “Struggle Bus”