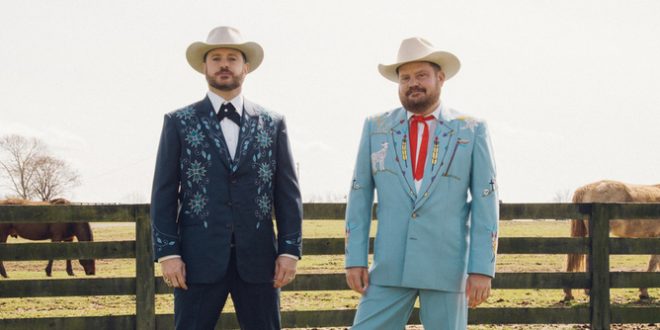 Randy Rogers and Wade Bowen lasso in the laughs with their brand-new video for “Rodeo Clown.” Directed by Tim Duggan with 5FoldsCreative and filmed at PJ Farms in Columbia, TN, the hilarious clip sees a heartbroken Bowen watching his ex-girlfriend build a life with – you guessed it – a rodeo clown… All while his best buddy, Rogers, provides emotional “support.”

From their custom Manuel suits – fashion statements that recently garnered a full WWD profile – to a special cameo from world-renowned bull rider Tuff Hedeman, the video perfectly highlights the traditional Country tone of the track, which served as the first offering from their upcoming album, HOLD MY BEER, VOL. 2 – out May 8.

“I love music videos because when they’re done right, they make you enjoy certain songs even more than you already did,” Bowen shares with CMT. “The first time I saw this video, I immediately felt like it fell into that category. ‘Rodeo Clown’ is already a funny song as is, but the video makes it that much better.”

“I think it’s a great take on a really funny song,” Rogers continues. “It’s the perfect complement to the track itself, because the video is hilarious in its own right… ‘Poor Wade,’ said no one ever.”

Written by Chris DuBois and David Lee, “Rodeo Clown” is the perfect preview for what’s to come off HOLD MY BEER, VOL. 2 – with CMT praising, “we’ve heard a lot of breakup songs from these two entertainers from Texas – but never one quite like this.” The memorable track echoes the classic Country sound that fans have experienced with the pair’s other releases from the project – “Hold My Beer” and “Rhinestoned” – all of which are immediately available upon pre-order of the album.

Music editor for Nashville.com. Jerry Holthouse is a content writer, songwriter and a graphic designer. He owns and runs Holthouse Creative, a full service creative agency. He is an avid outdoorsman and a lover of everything music. You can contact him at JerryHolthouse@Nashville.com
Previous Kenny Chesney To Mark Release Of “Here And Now” With Facebook Live Event
Next Toby Keith Shares Quarantine Performances Online