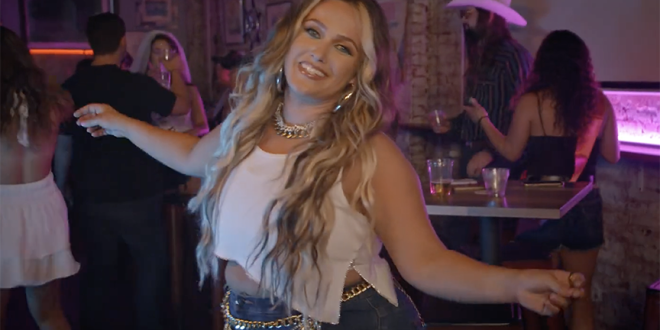 One of Nashville’s fastest rising stars, Mercury Nashville recording artist Priscilla Block, just released her latest video for her new song, “Off The Deep End.” In the video Priscilla decides that instead of wallowing in the wake of a breakup, she is going to hit the town to party with her friends.

“We had such a blast creating ‘Off the Deep End.’ Hope this one gets you feeling a little wild whether it’s at the bar, at the pool, or you found your Boat Daddy for the summer! Life’s short – sometimes you gotta let your crazy side show! I’ll be right there with y’all, Off the Deep End!” says Block.

Block is fun, real, relatable and often hits on self-love, empowerment, and acceptance topics. The Raleigh, NC, native moved to Nashville to pursue music shortly after high school. Early in the pandemic, Priscilla was struggling to make ends meet after losing her job and her apartment. A chance encounter with her idol – Taylor Swift – was the sign she needed to dive all the way in on her music. Unable to get out and play in person due to Covid-19, Priscilla began experimenting on TikTok and quickly developed a eager fanbase with songs like “Thick Thighs,” “PMS” and “Just About Over You.”

Fans rallied together to independently fund Priscilla’s recording and since its release, “Just About Over You” peaked both the iTunes Country and All-Genre song charts, the song was named to The New York Times Best Songs of 2020, and it recently reached Top 15 on country radio. Priscilla has surpassed more than 425+ million digital streams and counting with tracks like “Just About Over You,” “Wish You Were the Whiskey,” “I Bet You Wanna Know,” and her current single, “My Bar,” all featured on her major label debut album, Welcome to the Block Party, out now.

Block has opened for country superstars like Dierks Bentley, Jon Pardi, Kelsea Ballerini, Ashley McBryde, Rodney Atkins and more. Look for her at the Grand Ole Opry on 9/21 and at the Ascend Amphitheater on 10/1 (GET TICKETS HERE.)

Music editor for Nashville.com. Jerry Holthouse is a content writer, songwriter and a graphic designer. He owns and runs Holthouse Creative, a full service creative agency. He is an avid outdoorsman and a lover of everything music. You can contact him at JerryHolthouse@Nashville.com
Previous Americana Music Association Announces Its Show Performers And Presenters
Next Live On The Green Starts Tonight!