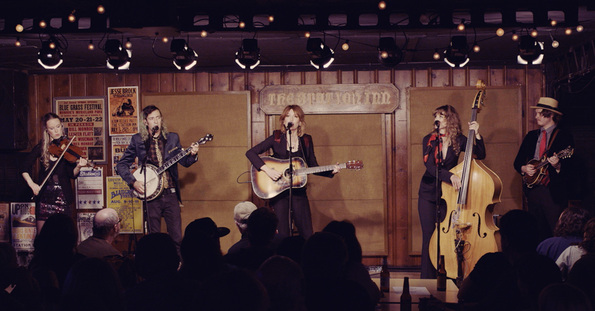 Out now via Nonesuch Records, Crooked Tree explores Tuttle’s love of bluegrass, which she discovered through her father and her grandfather, a banjo player. Recorded live at Nashville’s Oceanway Studios, the record was produced by Tuttle and Jerry Douglas and features collaborations with Sierra Hull, Old Crow Medicine Show, Margo Price, Billy Strings, Dan Tyminski and Gillian Welch.

Known for their electric performances, Tuttle and Golden Highway—Bronwyn Keith-Hynes (fiddle), Dominick Leslie(mandolin), Shelby Means (bass) and Kyle Tuttle (banjo)—will tour throughout this fall including AmericanaFest and Pilgrimage Music & Cultural Festival. “I always knew I wanted to make a bluegrass record someday,” says Tuttle. “Once I started writing, everything flowed so easily: sometimes I’ve felt an internal pressure to come up with a sound no one’s heard before, but this time my intention was just to make an album that reflected the music that’s been passed down through generations in my family. I found a way to do that while writing songs that feel true to who I am, and it really helped me to grow as a songwriter.”

Raised in Northern California, Tuttle moved to Nashville in 2015. In the years since, she has released two full length albums: her 2019 debut, When You’re Ready, and …but i’d rather be with you, a covers album released in 2020.

Tuttle was named Instrumentalist of the Year at the 2018 Americana Music Awards and the International Bluegrass Music Association’s Guitar Player of the Year in both 2017 and 2018, the first woman in the history of the IBMA to receive the honor.

Music editor for Nashville.com. Jerry Holthouse is a content writer, songwriter and a graphic designer. He owns and runs Holthouse Creative, a full service creative agency. He is an avid outdoorsman and a lover of everything music. You can contact him at JerryHolthouse@Nashville.com
Previous Cutter Elliott Defies The Odds
Next IBMA 2022 Bluegrass Music Award Nominees Announced