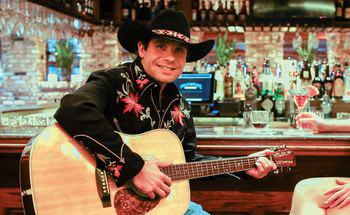 Is it against the odds if you don’t know it’s against the odds? Doctors told Cutter Elliott’s parents that he’d never walk, would never talk, would never sing, would never graduate high school, or graduate college but’s he’s done all of that and much more. Elliott was born eight weeks prematurely. He was diagnosed with autism and cerebral palsy but his mother, Debbie Elliott-Tresemer, never told him that doctors weren’t confident that he’d never be able to accomplish anything. When it was clear Elliott loved music his mother encouraged him to pursue it. He was singing at three years old and playing guitar at 14. “He would cry because his fingertips would hurt so bad. And we were like you got to just toughen them up,” said Tresemer. He has a photographic memory of songs and the history behind them as well as a 600 song repertoire now and never needs a chart or lyrics to perform.

The young man who wasn’t supposed to be able to do anything has done about everything including release his first album. “We got the top guys in Nashville and I’m very proud of that,” said Elliot. He’s laser focused on music and just wants to keep traditional country music alive. The rising star has also teamed up with Autism Speaks traveling the country telling his story. He will donate part of the proceeds from his album sales to the group. There’s also a new documentary coming out that helps tell his story as well.

“If somebody tells me I can’t do something, and I really want to do it, I’m going to do it,” said Cutter.
Listen Cutter Elliott music here.

Music editor for Nashville.com. Jerry Holthouse is a content writer, songwriter and a graphic designer. He owns and runs Holthouse Creative, a full service creative agency. He is an avid outdoorsman and a lover of everything music. You can contact him at JerryHolthouse@Nashville.com
Previous IBMA Announces First Recipient Of Performance Grant
Next WATCH: Molly Tuttle’s “San Francisco Blues”