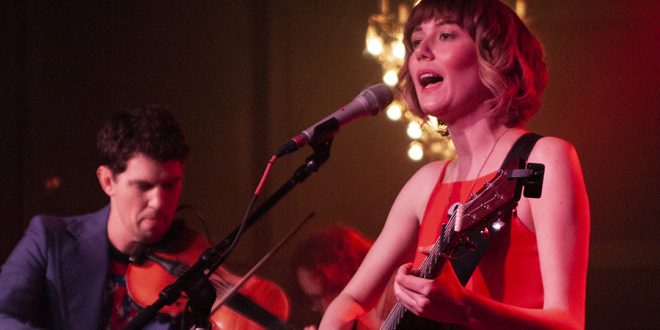 Nashville.com favorite, Molly Tuttle has shared the official music video for “Light Came In (Power Went Out)” from her debut album When You’re Ready (Compass Records). Filmed in Nashville, TN, the “Light Came In (Power Went Out)” video was directed by Jason Lee Denton. Graced with a clear, true voice and a keen melodic sense, Tuttle has become a word-of-mouth sensation for her incredibl flatpicking guitar technique and exhilarating live performances. Tuttle was named “Instrumentalist of the Year'” at the 2018 Americana Music Awards solely on the strength of her debut EP, RISE, and is also a two-time winner of the IBMA’s “Guitar Player of the Year” award.

Tuttle began performing at a young age as part of a family bluegrass band with her father and brothers and moved to Nashville four years ago, broadening her musical tastes and building her musical community. Now fronting her own band, she continues to break boundaries and garner the respect of her peers, while selling out shows both here and in the UK. With When You’re Ready, Tuttle gets to make the album she always dreamed of making, with a collection of genre-defying, personal songs that prove that she’s more than just a virtuoso. Recorded in Nashville with producer Ryan Hewitt (The Avett Brothers, The Lumineers), When You’re Ready is the perfect introduction to her range and versatility and establishes Tuttle as an artist with a long and exciting career ahead of her.

Following packed performances at Bonnaroo Music & Arts Festival, Telluride Bluegrass Festival and legendary venues across the country, Tuttle continues her North American tour through August, including such highlights as Newport Folk Festival, Four Corners Folk Festival, and as an opener for Jason Isbell and the 400 Unit on August 23 in Auburn, AL and August 24 in Greenville, SC.

Tuttle will be back in Nashville for 8/18 for a show at 3rd and Lindsley, 9/12 for the AmericanaFest and 9/22 for the Pilgrimage Music & Cultural Festival.

Music editor for Nashville.com. Jerry Holthouse is a content writer, songwriter and a graphic designer. He owns and runs Holthouse Creative, a full service creative agency. He is an avid outdoorsman and a lover of everything music. You can contact him at JerryHolthouse@Nashville.com
Previous Charlie Daniels And The Journey Home Project Donate 100K To MTSU
Next The Raconteurs Debut At Number One On The Charts