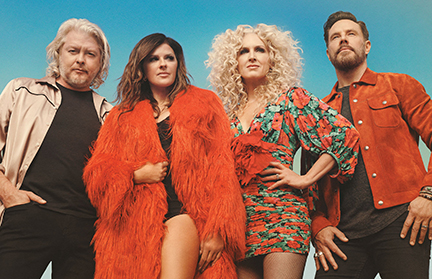 “Three Whiskeys and the Truth” was written by Karen Fairchild and Kimberly Schlapman alongside Hillary Lindsey, Lori McKenna, and Liz Rose, ruminating on the feelings that hide in the dark but that always come to the surface somehow. “Lori had that title, and I just love how it tells the story of what we do to numb the pain we’re going through,” Fairchild says, recalling a long day of writing. “And the melody makes it feel like an old school country song like the ones we grew up with.”

The album’s lead single “Hell Yeah” has amassed 49.8 million streams since its April release. The song was co-written by Phillip Sweet, Jimi Westbrook, Corey Crowder and Tyler Hubbard. Of its creation, Westbrook notes: “Corey dropped that hook idea on us, and we all gave a resounding hell yeah! At that point, you just don’t want to mess it up.”

The genesis of Mr. Sun was unlike any of their previous albums. Due to the pandemic, the band found themselves off the road and apart for the first time ever throughout their 20-year journey. The resilience and creativity born from those months unearthed a deep appreciation for both one another, and the privilege of making music – ultimately inspiring the self-produced Mr. Sun, which packs both the sparkle of storytelling and the heat of truth-telling in a way only Little Big Town can.

“Mr. Sun is intentionally an emotional record that holds hands well with our last album Nightfall,” Fairchild has previously shared. “Mr. Sun is focused on better days ahead, the value of friendships and family; it touches on heartbreak and letting go, but it’s full of sunshine and joy.”

Little Big Town spent all summer bringing their live shows to fans worldwide – they recently wrapped up The Bandwagon Tour with Miranda Lambert and joined The Eagles on all dates of their European stadium tour this summer.

Music editor for Nashville.com. Jerry Holthouse is a content writer, songwriter and a graphic designer. He owns and runs Holthouse Creative, a full service creative agency. He is an avid outdoorsman and a lover of everything music. You can contact him at JerryHolthouse@Nashville.com
Previous LISTEN: Mike Ryan’s New Single “Die Runnin’”
Next “Ashley McBryde Presents: Lindeville” Drops Sept. 30