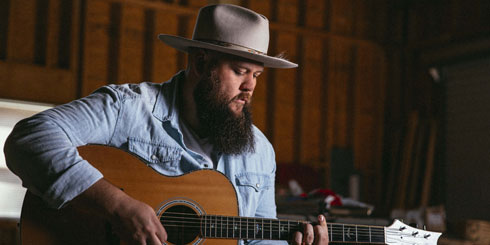 Big Loud Records singer-songwriter Larry Fleet is bringing the booze, the tunes, and the good times in the “Mix ‘Em With Whiskey” video, out today.

The video features Fleet kicking off a soulful serenade in a smoky bar, before supplying sips of whiskey to those around him. The special rye whiskey – branded “Papa Fleet”— serves to break up arguments, take the edge off, and cure the blues of the bar’s patrons. Directed by Justin Clough, the video was filmed 50 miles outside of Nashville at a roadside bar in Santa Fe, TN.

“Mix ‘Em With Whiskey” – penned by Ryan Beaver, Rodney Clawson, Andrew DeRoberts, and Adam Hambrick – is “built around a reverb-soaked, rising-and-falling electric guitar riff that nods to Sixties soul and cruises along at a relaxed pace.” (Rolling Stone).

“The first time I heard this song, I was immediately drawn to the soulfulness and groove of it and knew I had to record it,” said Fleet.

Previously sharing the bill with Jon Pardi and Willie Nelson, Fleet hit the road in early 2020 for Jake Owen’s DOWN TO THE TIKI TONK TOUR.

Music editor for Nashville.com. Jerry Holthouse is a content writer, songwriter and a graphic designer. He owns and runs Holthouse Creative, a full service creative agency. He is an avid outdoorsman and a lover of everything music. You can contact him at JerryHolthouse@Nashville.com
Previous Jake Owen Tops The Charts
Next Devon Allman Going “On Tour” From His House