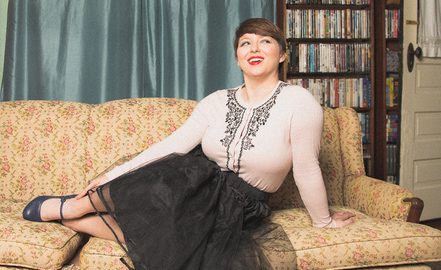 Singer-songwriter Kelly Hoppenjans has announced her new EP Can’t Get the Dark Out, set to release May 9, 2022. The 5-song project follows her breakout debut album OK, I Feel Better Now. Can’t Get the Dark Out explores the complexities of relationships, fate, and the process of breaking free from toxic patterns. Today, Hoppenjans shared a music video for her lead single, “Stain,” (Watch above).

“This song is a direct followup to one of my singles from my 2019 album, “Band-Aid Girl,” which is about trying to love and heal a broken person who doesn’t love you back,” Hoppenjans explains. “Touring with that album and singing lines like, ‘If you burn me, it’s a little bit my fault,’ over and over again put me back in the place that I was when I wrote the song, which wasn’t a happy one. I decided to write a song, inspired by the same relationship, that I could perform after ‘Band-Aid Girl’ to lift me out of that funk.”

The track’s video, which was produced by Crystal Bowersox and features art direction from Nashville visual artist Samantha Zaruba, uses simple yet impactful imagery to illustrate a moment that unexpectedly sparked lyrical inspiration.

“The first line I wrote for the song was ‘Clothing keeps a memory, it sets in like a stain.’ Sometimes I’ll get a line and I won’t know what it means yet, and I’ll just mull it over for months and months,” she notes. “It suddenly hit me that I could be talking about the skirt I wore the night that the guy I was dating invited me and his ex-girlfriend to the same show, which is the night I finally ended it with him. I still had that skirt up until very recently, when I dripped paint all over it while making the music video for this song! It was a pretty cathartic experience.”

Can’t Get the Dark Out was partially inspired by her own journey of finding love during the pandemic: navigating online dating, confinement, and impending life changes to sustain that love. After meeting her boyfriend via the dating app Hinge in September 2020, Hoppenjans began navigating the complexities of dating during a global pandemic. They shared conversations and meals together outdoors and each other’s homes until they felt comfortable enough to head to more crowded public settings. They shared their first date at a resturant in April 2021, and have since shared many new firsts together — including moving to a brand new city together.

“I wanted this album to be a messy love story,” Hoppenjans says, “The joys and struggles of finding love in a dark, difficult world.”

Music editor for Nashville.com. Jerry Holthouse is a content writer, songwriter and a graphic designer. He owns and runs Holthouse Creative, a full service creative agency. He is an avid outdoorsman and a lover of everything music. You can contact him at JerryHolthouse@Nashville.com
Previous Hank Williams Jr.’s Wife Mary Jane Thomas Passes
Next Nashville Symphony Announces 2022/23 Season