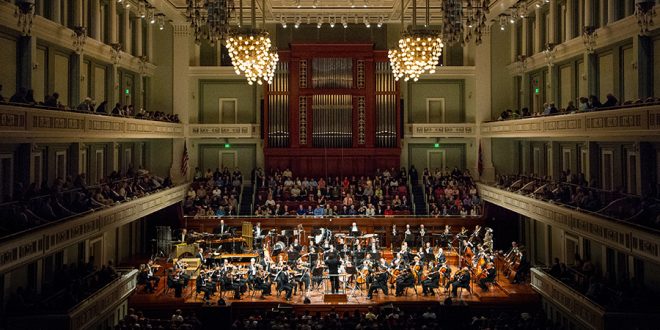 The Nashville Symphony has unveiled its 2022/23 season at Schermerhorn Symphony Center. Starting on Sept. 10, 2022, with Mahler’s transcendent “Resurrection” Symphony No. 2, the full lineup of concerts is listed below, posted at NashvilleSymphony.org, and available for sale in subscription packages. Additional concerts will be announced soon.

“Like everyone else, the Nashville Symphony has experienced two years like no other,” says President & CEO Alan D. Valentine. “We are profoundly grateful for the support of our subscribers and donors, whose loyalty and generosity have made it possible for us to reach this watershed moment, as we look forward to one of the most exciting seasons in our 75-year history. We have spent the past year learning how to reengage audiences in the midst of the pandemic, and we are especially proud of and grateful to our musicians, whose commitment to their artistry and to our community has remained steadfast amid numerous challenges.”

The Nashville Symphony will spotlight several of this country’s leading composers, beginning with the world premiere of Pulitzer Prize-winner Julia Wolfe’s Her Story, which the orchestra co-commissioned to commemorate the centennial of the 19th Amendment. After a two-year delay caused by the COVID-19 pandemic, this landmark work will open the Amazon Classical Series on Sept. 15-17, 2022, as part of a program celebrating women’s contributions to classical music over the last century.

“With this ‘Resurrection’ season, our resolve to continue championing new music – alongside works of the classical canon – is stronger than ever,” says Music Director Giancarlo Guerrero. “This season, we present composers who may have once been neglected because of background, race or gender, as with our first full classical program of the year dedicated entirely to the works of American women: Florence Price, Joan Tower and Julia Wolfe. This is the perfect statement of what the Nashville Symphony is all about.

“Two years ago, we were forced to cancel the performances and recording of Gabriela Lena Frank’s Conquest Requiem just a week before the performances. Gabriela and I are both from countries whose histories have been shaped by colonial conquest, so this subject material is important to us both, and resonates even more today. I am so thrilled that we will finally be bringing this groundbreaking work for orchestra and chorus (in three different languages) to audiences in Nashville and beyond next season.”

The Nashville Symphony’s biggest project of the season arrives on April 13-16, 2023, when the orchestra premieres its commission of trumpeter and composer Hannibal Lokumbe’s The Jonah People. Inspired by the artist’s own family history, and bringing together singers, actors, drummers, a jazz quartet and spectacular stage sets, this large-scale work represents the culmination of Lokumbe’s career and an expansive exploration of the Black experience in America. The Jonah People will also serve as the catalyst for a season-long series of community engagement activities, built on partnerships with organizations and institutions across the city.

“Orchestras bring music to life in a way that no other musical group is capable of – with such a wide-ranging sonic palette and a force of over 80 musicians collaborating and creating a unified acoustic sound together,” Lopez-Yañez says. “That’s what makes me so excited about our Pops and Movie Series in the 2022/23 season: the whole year showcases the ways in which our orchestra can transform and enhance music of all genres, whether they’re bringing new meaning and depth to your favorite hit songs, or creating a whole new dimension to the action unfolding onscreen in a movie.”

The Ann & Monroe Carell Family Trust Family Series returns with four fun-filled Saturday-morning programs designed to introduce young listeners to the orchestra. In addition to a Halloween-themed concert on Oct. 22, 2022, the Nashville Symphony will bring two innovative new programs to the Schermerhorn: Mason Bates’ Philharmonia Fantastique, a multimedia tour through the instruments of the orchestra, on Jan. 21, 2023; and Goldilocks and the Three Dinosaurs, a collaborative project featuring words by children’s author Mo Willems and music by Ben Folds, on March 25, 2023. (Neither Willems nor Folds will appear at this concert.)

Music editor for Nashville.com. Jerry Holthouse is a content writer, songwriter and a graphic designer. He owns and runs Holthouse Creative, a full service creative agency. He is an avid outdoorsman and a lover of everything music. You can contact him at JerryHolthouse@Nashville.com
Previous WATCH: Kelly Hoppenjans “Stain”
Next Country Singer Jeff Carson Passes At 58