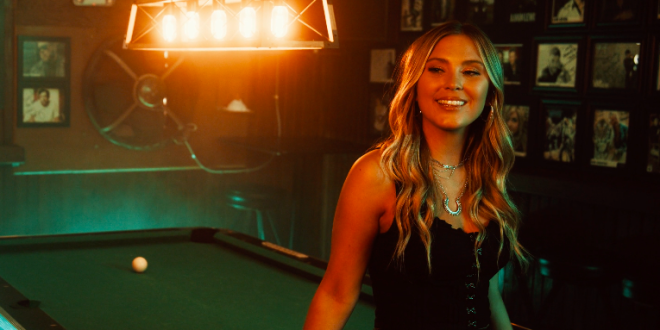 Karissa Ella released a brand new music video for her recently released single “Hometown Bar.” The already visually-rich song lyrics are now brought to life inside the ACM-nominated Dusty Armadillo in Rootstown, Ohio with the help of Wales Toney of Whale Tale Media serving as director and producer. This song is nostalgic and reminiscent and ponders the idea of the life the budding artist may have had if she had never chased her dreams to Nashville and stayed in her hometown of North Canton, Ohio. The video features some of Karissa’s family and friends from her hometown and highlights those places we can always come home to. Watch “Hometown Bar” above.

“We started the video shoot at 8:00 a.m. and ended at 8:00 p.m. The long day of shooting was rewarded with plenty of memories, laughs, and Bloody Marys. Let’s just say, all the extras didn’t need to be coached on how to have a good time,” Ella starts with a laugh.

“It was important to me that we filmed this video at my actual hometown bar in Ohio. Luckily, my videographers were up for the challenge and flew to Ohio to shoot at The Dusty Armadillo in Rootstown, Ohio. I wanted this video to be authentic and something that I will smile at when I look back on it. We had friends and family in the video which made it even more special. My hometown bar video is a nod to local bars and all the people in them. I hope people can identify with those salt-of-the-earth kinds of people that we all know and love!”

Karissa has been releasing new music this year produced by Casey Wood, who has credits with legends like Charlie Daniels, Reba McEntire and Randy Travis. “Hometown Bar” has racked up thousands of streams since its August release. She will be opening up for GRAMMY-nominated country singer, David Nail, at Nashville’s SkyDeck on Nov. 3 and making her Song Suffragettes debut on Nov. 21, 2022.

Music editor for Nashville.com. Jerry Holthouse is a content writer, songwriter and a graphic designer. He owns and runs Holthouse Creative, a full service creative agency. He is an avid outdoorsman and a lover of everything music. You can contact him at JerryHolthouse@Nashville.com
Previous Flatland Cavalry Drops “Songs to Keep You Warm” This Friday
Next 56th Annual CMA Awards Announce Performers