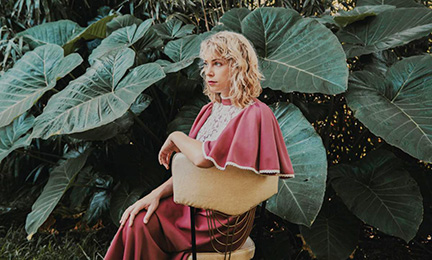 WATCH: K.C. Jones’ “Queen Of The In Between”

“No black or white, it’s all grey to me,” sings genre-spanning renaissance woman K.C. Jones amongst the stark backdrop of a lifeless, dusty town. The song she sings, along with its accompanying music video, embodies the moniker Jones has given her new record, and in some ways, herself; “Queen of the In Between.” As a teenager, Jones emerged from a deeply musical Appalachian family to become one of the foremost singers, guitarists, and dancers in old-time music. Moving to Southwest Louisiana, she quickly learned Cajun French and began writing preternaturally gifted original songs in dual languages with progressive Cajun bands like GRAMMY-nominated Feufollet and T’Monde. Both of these jumping-off points, what she casually refers to as “obsessions,” have fueled the music on her debut solo record, Queen of the In Between, released earlier this year. The aforementioned video for title-track “Queen of the In Between” is out today (watch above). Directed and edited by world renown cinematographer Tom Krueger, “Queen of the In Between” follows Jones through a visual dreamscape, perfectly encompassing the in-limbo feel of the song itself, drenched with tremolo-laden guitars, a healthy dose of psychedelic baritone melodies, and a tilt-shifted lens focused on the short film’s main and only character—further adding to the in-between theme.

Though Jones’s country, Appalachian, and Cajun roots are evident in Queen of the In Between, her love of late 60s/early 70s rock and singer-songwriter music—of which she is a devout record collector and enthusiast—is a sonic cornerstone of Queen of the In Between. “The couple of years before recording, I was obsessed with Gene Clark’s album No Other. I was listening to that a lot, some of Janis Ian’s weirder stuff, and probably a little too much T-Rex,” Jones laughs. Indeed, Queen of the In Between features a signature psych-twang baritone guitar sound throughout, sprinklings of Hammond B3 organ, even fuzzed-out, garage rock-esque guitar lines. Ultimately though, the record boasts spacious production that prioritizes melody, and Jones’ vocals and lyrics above all else. Jones says, “We wanted little ear candy elements through it, but the whole point of recording these songs for me, was wanting to communicate the lyrics.”

And for good reason; the lyrics themselves are a standout. It’s rare for an artist to come to the table with such a clear vision of who they are as a songwriter on a debut solo effort. From the simple metaphorical elegance of “Heat Rises”—Jones’ take on a finite cycle of love, from spark to dying ember, played out over one night around a campfire—to her tongue-in-cheek lament on the fast pace and pressures of modern life in “I’ve Got Time,” to the anxieties of beginning anew amidst a cloud of uncertainty in “Beginnings and Ends,” Jones is able to express the depths of fundamentally human and relatable emotions with astonishing directness. In Jones’ words, “I like to draw a picture, but get to the point.” It’s a gift that plays in glorious harmony with her one-of-a-kind voice—a little bit of twang, a rock ‘n roll edge, and even dreamy, 60s girl group moments with Ronettes-style backing vocals. Although Jones’ lyrics hit you straight-on, they’re exploring complex themes of personal growth, self-awareness, anxiety, intimate relationships, and heartbreak. There’s a radical sensitivity imbued in these songs, a commitment to sitting with one’s emotions in a truly introspective way. While it would be easy to categorize Jones more simply as a “badass rock and roll frontwoman”—and that doesn’t mislabel her, either—it’s her ways of finding strength and dignity through sensitivity that run a deeper, more subtle feminist thread through the album.

Queen of the In Between is at once edgy and gentle, raw and refined, confident and vulnerable. It’s a modern cosmic country treat for the ears, that places Jones squarely at the center of the broader, progressive, genre-bending roots music movement. Jones refers to the “quilt of the album,” and indeed, one could make that comparison more literally. Made of some warm and familiar pieces—a little bit nostalgic, but completely distinct when sewn together by Jones’ practiced hands—Queen of the In Between is simultaneously personal and self-aware while honoring something larger than itself. It invites the curious listener to ponder what’s next in Jones’ artistic trajectory. But for now, she’s given us plenty to revel in.

Music editor for Nashville.com. Jerry Holthouse is a content writer, songwriter and a graphic designer. He owns and runs Holthouse Creative, a full service creative agency. He is an avid outdoorsman and a lover of everything music. You can contact him at JerryHolthouse@Nashville.com
Previous The 2022 Grammy Nominations Are In!
Next Sam Grow Makes His Opry Debut