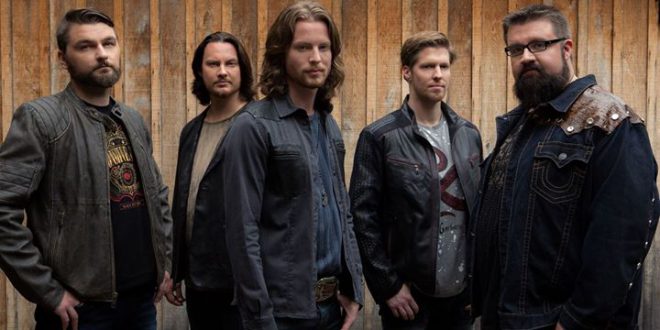 All-vocal Country entertainers Home Free salute to those we’ve lost on the front lines in their new video for Vince Gill’s iconic tune, “Go Rest High on That Mountain.”

A visual collaboration between Home Free and production teams at Bolo Brothers Creative and Green Shoe Collective, the emotional clip begins with a grandfather teaching his grandson how to properly fold the American flag, as he shares his own story of going off to war with his brother. The video flashes back in time to scenes of him dressed in his military uniform, hugging his wife goodbye before deployment and then returning back home – with his brother’s dog tags in hand.

“We’ve been performing ‘Go Rest High on That Mountain’ for a while now,” explains Rob Lundquist. “I can’t count the number of times we’ve had fans tell us how much this song means to them because it reminds them of their late loved ones – many, of whom, were military veterans. When the time came to make this video, we took that feedback to heart and decided we wanted to incorporate a story that would serve as a tribute to our fallen heroes. It turned out better than we ever could have imagined, and I’m so glad we got to recognize the men and women who sacrifice everything, in order for the rest of us to be free and safe.”

“‘Go Rest High on That Mountain’ is a song that affects everyone who hears it, country fan or not,” shares Austin Brown “It touches on those feelings of hope that we must remember in times of loss and change – something we all experience together in this life. Including it on DIVE BAR SAINTS was a unanimous decision.”

Coming up, the group is hoping to hit the road again this fall to continue on their DIVE BAR SAINTS WORLD TOUR, with all previously announced summer dates on the trek being rescheduled to later in the year.

Music editor for Nashville.com. Jerry Holthouse is a content writer, songwriter and a graphic designer. He owns and runs Holthouse Creative, a full service creative agency. He is an avid outdoorsman and a lover of everything music. You can contact him at JerryHolthouse@Nashville.com
Previous EXCLUSIVE PREMIERE: Campbell Harrison’s “The River”
Next Pickathon Announces “A Concert A Day” Starting Tomorrow