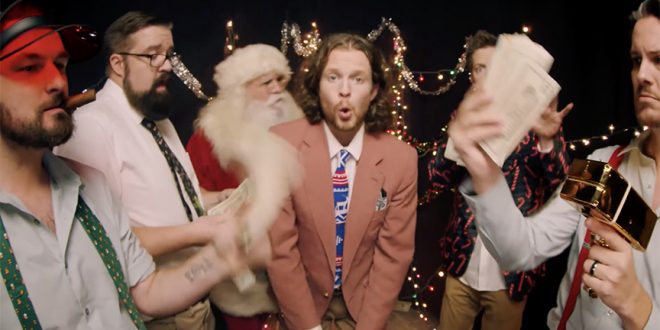 All-vocal Country entertainers Home Free are cashing in on the upcoming holiday season in their hilarious new video for “Cold Hard Cash.” (Watch above)

Shot by The Bolo Brothers in Nashville, the laugh-out-loud clip premiered last Friday (11/20) and serves as the perfect visual to the cheeky holiday tune. Featuring Home Free as Santa’s counterfeit elves, “Cold Hard Cash” follows the members of the acclaimed group, as they print off hundreds of Home Free bucks for Mr. Claus to deliver to those who were bold enough to ask for deeper pockets for Christmas.

“All of the other videos we’ve released over the last eight months were filmed apart from one another in our homes, and since we live in different cities across the nation, it felt great to be back together in the same place again,” baritone Adam Chance told People. “Our video team did an incredible job with props and set design, and all we had to do was show up and have fun.”

Featured on their recently released Christmas album, WARMEST WINTER, and co-written by the group’s high tenor, Austin Brown, alongside Andrew Tufano and Annika Bennett, “Cold Hard Cash” says exactly what many of us wish we could tell our loved ones when they ask what to get us for Christmas.

“Funnily enough, the idea behind ‘Cold Hard Cash’ initially sprang from me being given an over-abundance of socks one Christmas. “I brought it up to my co-writers as a joke at first, but once we actually started feeling it out and writing it, it turned into this fun song that everyone seems to really vibe with.”

Home Free will also cap off their year with their only in-person holiday show – a socially distanced event at Nashville’s Ryman Auditorium on December 21.

Music editor for Nashville.com. Jerry Holthouse is a content writer, songwriter and a graphic designer. He owns and runs Holthouse Creative, a full service creative agency. He is an avid outdoorsman and a lover of everything music. You can contact him at JerryHolthouse@Nashville.com
Previous The Swon Brothers Drop Self-Produced Album NASHLAHOMA Today
Next Hal Ketchum Dead At 67