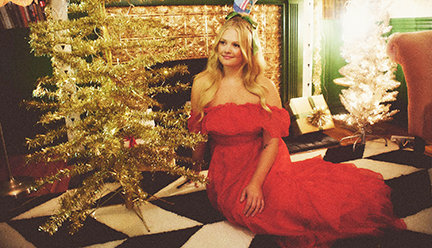 Today, Iowa-born, Nashville-based rising country star Hailey Whitters released a cover of George Jones’ Christmas classic “New Baby For Christmas” and announced she will support Shania Twain on a string of tour dates in May 2023. This new song arrives as Whitters’ breakthrough single “Everything She Ain’t” from her new album RAISED continues the climb the Billboard Country Airplay (currently #40) and Hot Country Songs charts (currently #31).

“’New Baby For Christmas’ was initially recorded in 1957 and I thought it was fun, as it’s kind of a honky tonk heartbreak/cheating song disguised as a Christmas song,” explains Whitters.

“Every Christmas Eve since I can remember we’ve always gone to my Aunt Tina’s house and sung christmas songs on her living room floor around the Christmas tree waiting for Santa to arrive. Everyone brings a covered dish and drinks lots of red wine and doesn’t care how out of tune they may be, we all just sing together. It’s something I look forward to every year and are some of my most cherished memories. I wanted to make a record that captured the warmth and nostalgia of this holiday for me, and celebrates getting to be with the people I love.

We recorded live in Historic RCA Studio A with an all-star cast of Nashville session musicians – heavily featured steel guitar, fiddle and upright bass – using minimal modern post-production techniques, and I even sang on the floor in the same spot Dolly used to sing to capture the natural reverb of the room. There’s so much history in that room we wanted to capture and it felt like everyone was really feeling the spirit.”

This fall, Whitters wrapped up a national tour with Jon Pardi and Lainey Wilson, made her Red Rocks debut supporting Midland on October 22, and played her first headline show in Nashville in over two years that garnered a rave review from The Tennessean who proclaimed, “Whitters’ first headlining Music City set in 31 months highlighted not just where she is as a person and professional at 33 years old. Instead, it offered a sense of how successful her next 31 months and 33 years could potentially be.”

Music editor for Nashville.com. Jerry Holthouse is a content writer, songwriter and a graphic designer. He owns and runs Holthouse Creative, a full service creative agency. He is an avid outdoorsman and a lover of everything music. You can contact him at JerryHolthouse@Nashville.com
Previous The 56th Annual CMA Awards Announces Additional Performers
Next George Strait Adds Second Show To Nissan Stadium