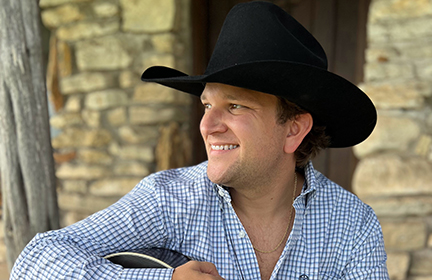 Rising star David Adam Byrnes’ new album comes out on 9/30 with a brand new video, the title-track “Keep Up With The Cowgirl.” (watch above) The Reviver Records singer has partnered with Durango Boots on this video that was shot in Nashville and is in celebration of National Day of the Cowgirl, a celebration and recognition of the spirit of the American cowgirl. The video features real life video of Team Durango professional female athletes including Stevi Hillman (barrel racer), Jordon Briggs (barrel racer), Lisa Lockhart (barrel racer) and Kelsie Domer (breakaway roper).

2022 has been a whirlwind year for Byrnes. A consistent flow of song releases along with a tour schedule that has nearly doubled has kept the young artist in an uninterrupted state of “ready, set, go.” It’s been a long and satisfying journey starting in 2008 when a 19-year-old Byrnes left his hometown in Arkansas and moved to Nashville, TN in an attempt to deliver his brand of country music to the great Music City, and secure a budding career as a music artist. Within his first year he signed a publishing deal/record deal and spent years in writing rooms with some of the town’s best songwriters. His first taste of success came with the release of his single “Sweet Distraction” that hit #62 on Billboard and the Top 20 on Music Row, which was the highest debut from a new act that year. He became a quick study in the art of songwriting, something he was very adept at from the start, yet he always had starry eyes for the stage. Monday through Friday, David Adam Byrnes sat in writing rooms pumping out the kind of songs that were groomed for the country music charts. A coveted spot at the Key West Songwriters Festival and performing with guys like Paul Overstreet and Keith Stegall, before he knew it he had an impressive catalog of tunes, 5 of which that were spoken for by a handful of Nashville artists, and destined for the top of the charts. Just as the stars were moving into perfect alignment for him, the publishing deal collapsed, and though he had another deal on the table, he wasn’t able to sign due to ongoing legal issues, and so those 5 magical cuts were, as they say often in the songwriter circles, “healed.”

In 2018, David made the move to the Ft. Worth area, a place where his re-donned cowboy hat fit right in. Byrnes spent years fighting his way back to himself as an artist by rewiring his brain to write the songs he lived and felt instead of the formulaic scramble to pen the next “big thing.” Ironically, every single he has released have all hit #1 on the Texas Regional Radio Chart making DAB the only artist to ever accomplish such a feat in the chart’s 18 year history.   “I had to get back to me,” Byrnes explains. “Had to get back to why I love country music. I’m so much happier doing the music I truly love, and when you find yourself in music, people seem to take notice.”

A lot of attention is being paid to DAB these days with 10 million total streams, over 100,000 social media followers, and a double win at the 2022 Arkansas Country Music Awards as Entertainer of the Year and Male Vocalist of the Year. Wide Open Country hit the nail on the head when they branded him “Artist To Watch” in 2021.

Music editor for Nashville.com. Jerry Holthouse is a content writer, songwriter and a graphic designer. He owns and runs Holthouse Creative, a full service creative agency. He is an avid outdoorsman and a lover of everything music. You can contact him at JerryHolthouse@Nashville.com
Previous Dan Tyminski Signes With 8 Track Entertainment
Next CMA Pledges $100,000 To Music Health Alliance