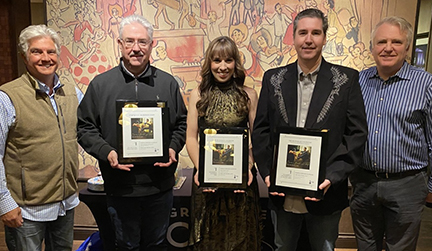 Just before Darin & Brooke Aldridge walked on stage for their Friday night Grand Ole Opry appearance, they were surprised backstage by their record label with three plaques acknowledging their #1 album and single successes of 2021, for their album This Life We’re Livin’ and for singles “Blue Baby Now” and “He’s Getting Me Ready” (with the Oak Ridge Boys). The husband and wife duo just released a new single and video, “Grand Ole Circle,” a tribute to their beloved Opry. Watch above.

The husband and wife duo have placed several tracks at the top of the charts on Roots, SiriusXM, Bluegrass and Gospel charts. Brooke is the 4-time reigning IBMA Female Vocalist of the Year and Darin spent 6 years as a member of the acclaimed County Gentleman and is a highly sought-after multi-instrumentalist. Darin was also named the IBMA’s Momentum Mentor of the Year in 2017 for his efforts at teaching and mentoring youth on guitar and mandolin and for giving unselfishly of his time and talents at public events at places like the Earl Scruggs Center in Shelby, NC

Music editor for Nashville.com. Jerry Holthouse is a content writer, songwriter and a graphic designer. He owns and runs Holthouse Creative, a full service creative agency. He is an avid outdoorsman and a lover of everything music. You can contact him at JerryHolthouse@Nashville.com
Previous Brian Kelley Announces His First Solo Tour
Next Brei Carter Kicks Off Black History Month With A Classic