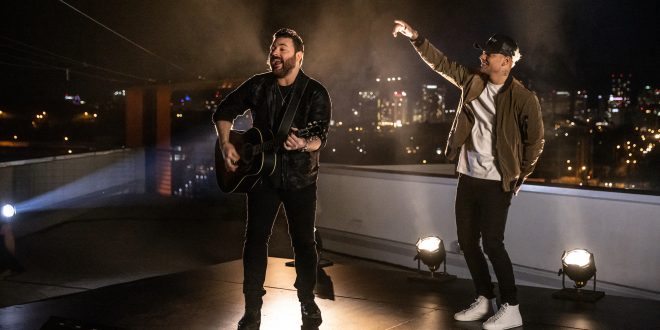 Chris Young and Kane Brown teamed up in the official music video for their top 25 and rising track “Famous Friends.” The pair took part in a live chat with fans last night during the countdown to the clip’s world-premiere. True to the song’s sentiment, many of their real-life friends are featured in the music video, including Corry, Brandon and Meagan, plus a live rooftop performance with Chris and Kane while overlooking downtown Nashville. The video is directed by Peter Zavadil/Tiny Terror Productions.

“I can’t imagine a more perfect video for ‘Famous Friends’” said Chris. “Peter knocked it out of the park on this one! I had a blast seeing my friends on set, and that rooftop performance with Kane is some of the most fun I’ve had in a video.”

Written by Chris with Cary Barlowe and Corey Crowder from a headline tour stop in Tampa in 2018, “Famous Friends” was teased by Chris and Kane on social media last year. The autobiographical song mentions Rutherford County, where Chris grew up in Tennessee, and Kane’s hometown of Hamilton County along with Nashville’s Davidson County.

An anthemic tribute to the names, faces, and legendary stories that make up each hometown, “Famous Friends” is Chris and Kane’s first collaboration since working together on Kane’s 2017 song “Setting the Night On Fire.” Additionally, the song reunites the former tour mates from Chris’ 2018 Losing Sleep Headlining Tour — which included a sold-out hometown show at Nashville’s Bridgestone Arena — and is a full-circle moment since Kane’s first live concert experience as a young Country fan was at a Brad Paisley and Chris Young tour stop.

Music editor for Nashville.com. Jerry Holthouse is a content writer, songwriter and a graphic designer. He owns and runs Holthouse Creative, a full service creative agency. He is an avid outdoorsman and a lover of everything music. You can contact him at JerryHolthouse@Nashville.com
Previous Gary Brewer Teams With Ashton Shepherd On New Single
Next LISTEN: Maggie Rose’s “What Are We Fighting For”