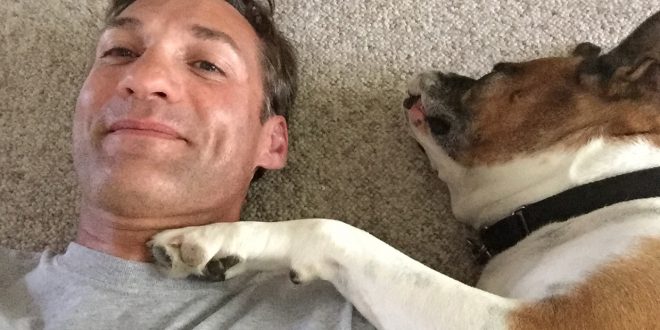 When acclaimed country hit maker and guitar slinger Wade Hayes went through two bouts of colon cancer, he had one constant in his life: his dog Jack. Hayes recently premiered the new video for the touching song, “Who Saved Who (Jack’s Song),” and the clip has already received over 42,000 views and almost 1,000 shares on Hayes’  Facebook page .
The song is a true story of how Hayes met his dog, Jack, at a gas station around midnight 75 miles outside of Nashville eight years ago
In December of 2011, at age 42, Wade was diagnosed with advanced colorectal cancer. Successful surgery and chemotherapy removed the cancer. A year later, Wade was devastated to learn the cancer had returned. He received additional treatments, and today he has no evidence of disease. Jack was by his side through it all.
He first performed the song at a songwriter’s round on board StarVista LIVE’s Country Music Cruise and brought fans to tears tears
Korby Lenker directed the clip, which was shot at Wade’s home outside Nashville and at a farm in Lewisburg, TN known for saving rescue dogs. Lenker solicited photos of fans with their dogs through Wade’s Facebook fan page.
Wade is confirmed to perform “Who Saved Who (Jack’s Song)” on the Hallmark Channel’s popular “Home & Family” on January 10, 2019. He will kick off his 2019 touring at Stampede Houston on January 11 and will perform on the sold out Country Music Cruise setting sale January 27, 2019.

Music editor for Nashville.com. Jerry Holthouse is a content writer, songwriter and a graphic designer. He owns and runs Holthouse Creative, a full service creative agency. He is an avid outdoorsman and a lover of everything music. You can contact him at JerryHolthouse@Nashville.com
Previous Bonnaroo Lineup 2019 Announced!
Next Charles Wesley Godwin Set To Release Debut Album