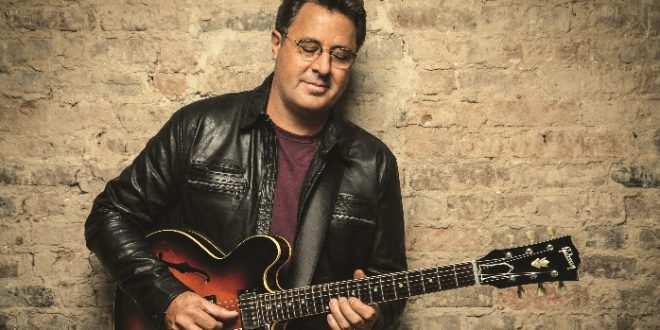 Today Vince Gill released the fourth focus track from his upcoming album OKIE (8/23 street date). “A World Without Haggard” pays tribute to one of Gill’s foremost musical heroes, the late Merle Haggard. The song fits perfectly into the heart-wrenching collection of songs that is Gill’s latest album, as demonstrated when Gill sings, “He made me proud to be an Okie/Lord knows we paid our dues/He was my greatest inspiration/The reason why I sang the blues.”

“I wrote this song the same day that I woke up and found out he had passed away—that night on his birthday,” says Gill, “When someone asks, ‘Who is your favorite artist?’ I always say Merle Haggard. When somebody says ‘can you define country music?’ I say ‘play Mama Tried.’”

“We got to be pretty good friends over the last few years of his life, and I got to sing on the last project he was working on at the time of his death,” Gill continues, “So to get to sing with him finally was easily one of the greatest thrills of my life.”

On September 9, Gill will join Ken Burns in conversation with fellow filmmakers Dayton Duncan and Julie Dunfey at the famed 92nd Street Y. The event will include a screening of selected clips from Burns’ upcoming PBS documentary, Country Music, and a performance and album signing by Gill, whose interviews feature prominently throughout the film.

With 21 Grammy Awards to his name, Gill has solidified his place as country music’s most eloquent and impassioned champion. He is both a world-class musician and a wide-ranging songwriter whose compositions earned him entry into the Nashville Songwriters Hall of Fame in 2005 and the Country Music Hall of Fame in 2007.

Music editor for Nashville.com. Jerry Holthouse is a content writer, songwriter and a graphic designer. He owns and runs Holthouse Creative, a full service creative agency. He is an avid outdoorsman and a lover of everything music. You can contact him at JerryHolthouse@Nashville.com
Previous Charlie Daniels Patriot Award Dinner Sets Date
Next “Morris Higham Presents at The Bluebird Cafe” Raises $2500. For MusiCares