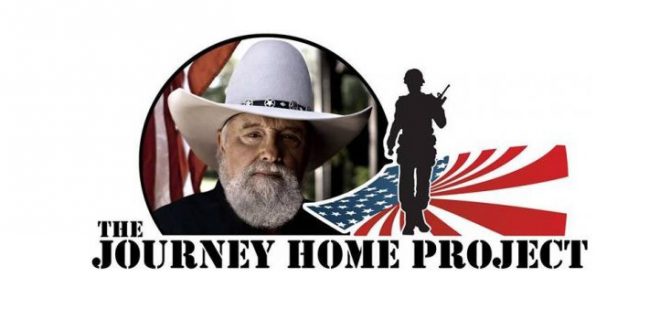 Country music and southern rock legend Charlie Daniels has announced the second “Charlie Daniels Patriot Award Dinner” to be held on Tuesday, September 10 at The Palm Restaurant in Nashville, Tennessee. The evening will feature remarks by Command Sergeant Major Bennie Adkins (US Army, retired). Adkins is a recipient of the Congressional Medal of Honor, the highest and most prestigious military decoration that can be awarded to a service member.

“We’ve got an interesting, entertaining and meaningful evening planned this year and The Journey Home Project would like to extend our truly heartfelt gratitude to our friends who attend and make the evening such a success year after year,” says Daniels.

On behalf of his veterans non-profit organization The Journey Home Project (TJHP), the Country Music Hall of Famer will also award this year’s Charlie Daniels Patriot Award to three special honorees, handpicked by Daniels and his manager and TJHP co-founder, David Corlew.

The criteria for the Charlie Daniels Patriot Award is based on the mission of The Journey Home Project: to support veterans in their return, rehabilitation, and reintegration back into civilian life. The award honors a person, persons, or group that fulfills and exemplifies the efforts and dedication of TJHP’s purpose to continuously care, support and encourage the men, women, and families who have served our great nation.

Doors open at 6:30 p.m. with The Palm’s signature Surf & Turf dinner beginning at 7:00 p.m. The program and live auction begin at 8:00 p.m. The event’s online silent auction is live now (HERE) and closes on August 21 at 5:00 p.m. A second premium silent auction goes live on August 27 and will conclude the evening of the event (September 10 at 8:30 p.m.). These silent auctions include dozens of unique items including Caribbean vacations, sports and music memorabilia as well as one of a kind items not available to the public.

All proceeds from the evening benefit The Journey Home Project. The event is produced by David Corlew & Associates.

Music editor for Nashville.com. Jerry Holthouse is a content writer, songwriter and a graphic designer. He owns and runs Holthouse Creative, a full service creative agency. He is an avid outdoorsman and a lover of everything music. You can contact him at JerryHolthouse@Nashville.com
Previous Brooks & Dunn HOF Exhibit Opens Today
Next Vince Gill Releases Touching Tribute to Merle Haggard